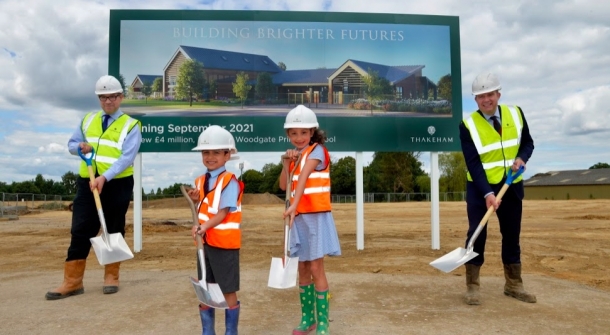 Dignitaries and developers joined forces to celebrate the start of building a new £4 million primary school at Pease Pottage on Friday 10th July.

The groundbreaking celebration marked the official start of work on the new £4 million Woodgate Primary School.

Woodgate Primary School is expected to open to its first pupils at the beginning of the 2021 school year.

Rob Boughton, CEO of Thakeham Group, said: “We have sought to fund and deliver Woodgate Primary School at an early stage of the development. This is because the school will play such a crucial role in inspiring a thriving new community.

“We are grateful to everyone who has played their part in offering feedback and helping us to design a school to make West Sussex proud.”

Jeremy Quin, Member of Parliament for Horsham said: “I was delighted to hear about the new school and see where it will be provided.  Schools in our area are rightly well regarded and I am sure this school will be a great asset for the community.  I am very much looking forward to the school being open to pupils.”

Cllr Nigel Jupp, Cabinet Member for Education and Skills, West Sussex County Council, said: “This is a significant milestone in the building of an excellent new facility for pupils, including those relocating from Warninglid Primary School.

“Woodgate Primary School is an important part of our School Effectiveness Strategy, which aims to give children and young people the best start in life. I look forward to seeing the first pupils welcomed into the new classrooms when they open next year.”

Stephen Lodge, Executive Director for Development and Strategic Asset Management at Radian Group said: “It’s great to be building a school that will offer so much for local children and give them access to state of the art facilities. By building the school first we will have the foundations for the heart of a new community.”

The celebration comes in the same week that the Chancellor announced a £1bn programme to make public sector buildings, including schools meet Net Zero by 2050. As an infrastructure-led placemaker, Thakeham launched its own crusade to become Carbon Neutral by 2025 earlier this year.

The Woodgate development is a joint venture between Thakeham Group and Radian. The 45-hectare site is located off Parish Lane to the south of Crawley and to the east of the Moto Service Station in Pease Pottage.

Woodgate includes 619 new homes, a shop and a coffee shop, a community centre, parks and a pavilion.

The development will also provide a home for locally-based charity, St Catherine’s Hospice.

More information about Woodgate, including infrastructure and the wide-range of community facilities, is available at www.mywoodgate.co.uk