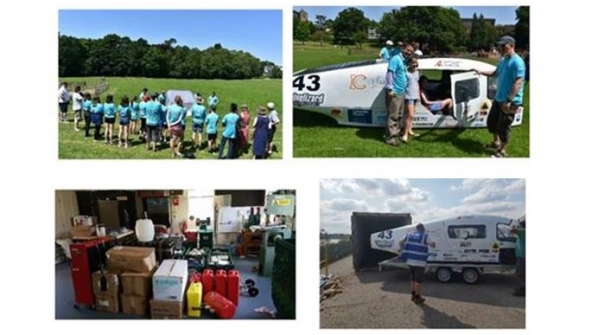 The Solar Car having left Tilbury Docks in mid-July just arrived in Adelaide enroute to Darwin for the Bridgestone World Solar Challenge 2019.

The Car is a testimony of the students from two schools working together on a major STEM project.

In late June the car was given a tremendous send off by the Mayor of Haywards Heath, Cllr Alastiar McPherson.

The Shipment of about 4 tonnes included a portable generator, camping & safety equiptment allowing students form 16 to 18 years old to compete in this challenging event.

The convoy consists of 5 support vehicles including two 4 wheel drives, two 8 seaters and a supply lorry.

As part of the preperations for this race, the solar team attended a "Survival Day". It is hoped the skills gained will not be used!

The School team is leaving on the 7th of October for Darwin to compete against international companies and major universities. Their aim, having already represented GB in the European Solar Race, is to achieve the UK record for the greatest number of solar miles.

We thank our sponsors and in particular for the support of HSH Prince Albert II of Monaco Foundation for their belief in our vision of Sustainable Transport.

Please follow us on this epic journey from 13th October till 19th October.