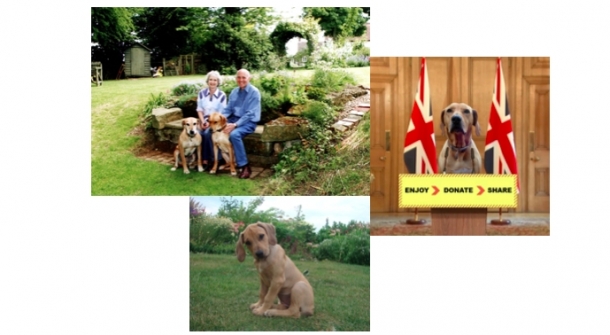 A family, who were unable to open their private garden to the public this summer, to raise money for St Catherine’s Hospice, have created a special moving film instead.

Gordon Gillett and his wife Carol have opened their garden to people in the community over many years (for 11 years as part of the National Garden Scheme). In total they have raised more than £100,000 for cancer related charities with most of the money raised donated to St Catherine’s.

This year, due to coronavirus restrictions, Gordon was unable to open their garden as planned so along with his family decided to bring the garden directly to people on film. But this film had to be different (it had to be humorous, and with beautiful music to complement the glorious setting).

Gordon said, “Many years ago, my lovely wife Carol, almost single handedly, created a special garden from a 1 ¾ acre wilderness. It was untouched for decades, and when we moved in, it was a mix of brambles and fallen trees.

Carol lovingly created the most beautiful garden. We enjoyed opening it each summer and sharing it with others in our community, but when Carol became ill with cancer, her strength failed. In January 2019, St Catherine’s helped Carol to die peacefully at home, as she wished.

Although I have no gardening skills I’ve worked on all fours for many hours, trying to maintain our garden so it could be opened again this June. It would have opened during the most beautiful sunshine, but unfortunately it wasn’t to be. It’s a great shame because it would have been lovely to see people, and based on last year, I hope Carol’s garden would have raised around £4,000 for the hospice.

As a family we thought about what we could do to support the hospice instead, and as people can’t come to us, we decided to take Carol’s garden to them using a ‘different’ film.

My eldest grandson, Tom and his girlfriend Charlotte, have created a special film featuring our beloved dog, Briony, who Carol helped into the world. I’m thrilled with it, and I hope our video will bring a smile to many of your faces too, during this challenging time.

If you enjoy it, I hope you’ll consider giving a donation to St Catherine’s. They do a really brilliant job helping over 2,000 people each year with end of life care, and also in supporting their families.

It’s been really wonderful to see the reaction to our film so far and knowing people are still able to enjoy Carol’s garden, even in a different way, is lovely. All proceeds from our video will go to St Catherine’s and we hope to raise £4,000.”

Arron Trott, Events Fundraiser at St Catherine’s said, “When we saw Gordon and his family’s beautiful film we were all really moved. It really brings Gordon and Carol’s beautiful garden to life, and we’re so grateful to Gordon and his family for their creativity and continued support. In a short amount of time, they’ve already hit their target and raised over £4,000, but I hope lots more of you will support Gordon by watching the film, donating and sharing it with your own networks. It’s only thanks to the support of people in our community that we can continue to provide local people with hospice care when it’s needed most.”