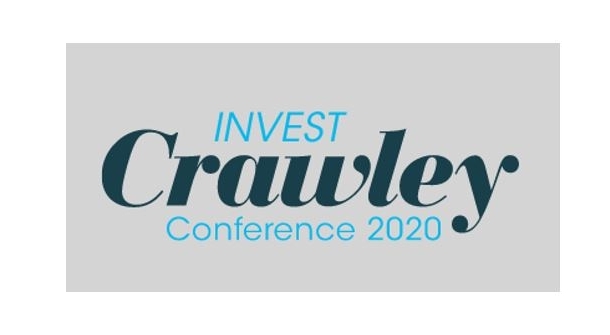 Crawley, despite the COVID-19 crisis, is “set fair” to recover and pursue growth with stakeholders committed to the borough’s success, delegates at the Invest Crawley Briefing heard on 23 June.

Crawley, forecasted to be impacted the most significantly by the aviation industry crisis, has seen Universal Credit claims rise from 2.4% in March to 7.2% in May, above the national average. Various forecasts depict some of the greatest economic difficulties ahead for the borough, but Clem Smith, Head of Economy and Planning at Crawley Borough Council, said: “It is important to emphasise that as it stands these are forecasts and Crawley is extremely well placed to prevent them due to our fantastic economic success story and our massive regeneration programme.”

Mr Smith went on to tell delegates that the borough’s economy has grown by 23% since 2013 and was worth nearly £6billion per annum in 2018. While only having 2% of West Sussex’s land, it accounts for 26% of the region’s economic output.

Mr Smith also told delegates that Crawley has the opportunity to implement a counter-recessionary recovery programme, worth more than £1bn, which is already in progress, including the delivery of a vibrant new residential neighbourhood in Crawley Town Centre and significant investment in state of the art new commercial space in Manor Royal.  Crawley Borough Council is leading by example, working with Westrock on the £150m Town Hall site redevelopment, which will provide a new Town Hall home for the borough council, alongside 78,000 sq ft of Grade A commercial office space and 273 new flats – 91 of which are currently being built. Work has also started on the new nine-storey Town Hall building with its five floors of commercial space.

The borough council is working with City Fibre and West Sussex County Council to roll out a £27m package of investment in gigabit-speed, full fibre broadband, which will benefit the town centre, the Manor Royal Business District and Crawley’s neighbourhoods. Combined with the large-scale Crawley Growth Programme investment in sustainable transport infrastructure – the County Council-led Eastern Gateway scheme (due on site this autumn) and the Arora Group, Network Rail and borough council-led Station Gateway schemes, there’s plenty going on across the borough.

These Coast to Capital LEP part-funded schemes all come ahead of the Towns Fund, which, being launched in the autumn, will see Crawley Town Deal Board, led by the borough council, seek to secure up to £25m in government funding to continue to drive regeneration in the town centre and Manor Royal and unlock further business investment.

The UK’s second largest airport, Gatwick, is continuing to operate and rebuild its operations following the COVID-19 crisis, as airlines resume flights and borders begin to reopen. The airport has been engaging stakeholders and has made a plea to government to protect the sector by developing risk-based quarantine rules, reintroducing the ‘use it lose it’ slot allocation rules for airlines, extending the furlough scheme to 2021, business rate exemptions and a common-sense approach to regulation and fees for the Civil Aviation Authority, air traffic control, and others.

Alison Addy, Head of Community Engagement at the airport, said looking ahead the airport would be building consumer confidence and supporting airlines, and focusing, in the short term, on getting Gatwick moving again as it will kickstart the economy and protect local jobs.

Employers also have the chance to look at relocating their offices closer to their employees. Adam Godfrey, Senior Partner at SHW, said: “Occupiers will, and should, review their spatial needs and will consider a more flexible working environment.”

Mr Godfrey said he thought this would lead to increased activity in the office market, as employers will be more likely to relocate as they look at the space they need – and Crawley was well-positioned to take advantage.

“We have a fantastic range of quality accommodation in our office market,” he said.

“We have a very active and visible local authority that is very supportive of existing businesses that are here and also very encouraging and available to speak to companies that are considering relocating or investing in the town, and we’re lucky to have that.”

With Crawley having an international airport on its doorstep as part of its extensive transport network and a “ready, willing and able workforce,” Mr Godfrey summed up, saying: “Crawley really is a town of opportunity. Why would you not come to Crawley?”

The Invest Crawley Conference, originally scheduled for June 2020, will be taking place in 2021 and will go into further detail about the plans for the borough, as it moves into the recovery phase. Keep updated with the latest on the conference at investcrawleyconference.co.uk