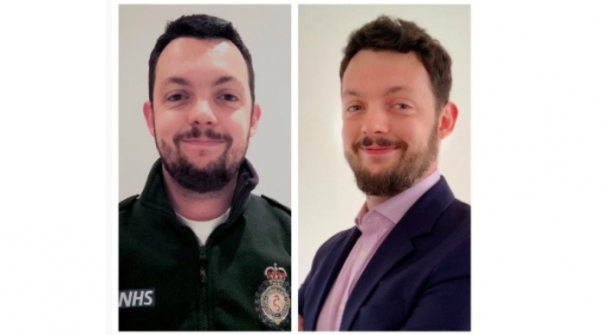 For the last three months, a Govia Thameslink Railway worker has been giving up his own time to volunteer as an emergency ambulance crew member after answering a call for help during the pandemic.

Prior to joining GTR, Tom Abbott had been a Sergeant and advanced police medic with the British Transport Police, and before that he had worked as an emergency medical technician for North West Ambulance Service NHS Trust. Given his background, the Londoner was able to answer a call for returning qualified staff to join London Ambulance Service NHS Trust (LAS) on frontline emergency ambulances following a surge in demand due to Covid-19.

Tom, who is GTR’s Head of Network Operations at Three Bridges Rail Operating Centre, said: “Once you've worked in the emergency services, you never lose your affinity with the teams you worked alongside. It's a unique environment with a real shared sense of purpose and camaraderie, not unlike the railway. Given that I still had my blue-light driving and clinical skills, it was an easy decision to answer the call and do my bit to support my ex-colleagues and the wider public.”

Tom started volunteering for LAS in March and was initially driving intensive care ambulances on behalf of St George's Hospital in Tooting, doing blue-light transfers for confirmed Covid-19 patients in ITU, alongside an ITU Retrieval Team (usually an anaesthetist, a consultant and a nurse). In this role, he was solely driving and had no clinical contact with those on board. The ambulance cab was airtight and completely locked off from the rear so as to remain 'clean'.

In April, he did a refresher course with LAS and returned to crewing their frontline 999 ambulances, just like he used to, responding to any and every call you can think of, from cardiac arrests, to mental health incidents and road traffic collisions. In this role, he had access to the highest standard of personal-issue PPE.

So how does volunteering fit in with working on the railway? Tom said: “I'm lucky to have had absolute support from the directors and exec at GTR from the start. Fitting in volunteering isn’t easy, but I've used a combination of rest days and annual leave to fill ambulance shifts where required. Working shifts for GTR is a benefit, because I can work days, lates or nights with LAS depending on what I'm doing here.”