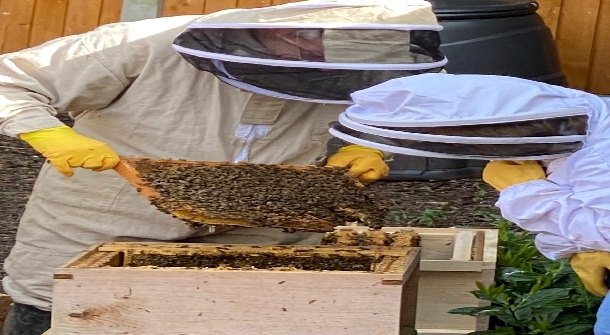 The sudden increase in temperature and sunshine has meant an explosion of blossom and noticeable increase in bees going about their work.

There has also been a worrying surge in calls to pest controllers from people confusing bees with wasps and asking for treatment.

In the spring many UK bee species become more active and this increase in activity can cause unnecessary confusion and concern for some people.

Cleankill Director Clive Bury, a beekeeper himself, explains: “When they call us people are absolutely convinced that they have wasps, but it is too early for wasps so we know they are bees. Honeybees are frequently mistaken for wasps. However, wasps don’t become active until early summer, so if you see a buzzing insect in the spring it will be a honeybee, not a wasp.”

There are around 250 types of bee in the UK, including 25 bumblebees and one type of honeybee. It is important to remember that bees are beneficial and vital insects, which are not normally considered as pests.

“Many species of bee are considered ‘endangered’. Bees are very important pollinators – they pollinate about a third of everything we eat. Although many bee species have stings, they will only sting people if strongly provoked and, because they are so beneficial, every effort should be made to avoid controlling or destroying them,” stressed Clive.

Honeybees usually exist within hives in the care of beekeepers. But there are feral honeybee colonies living in the wild. As summer approaches, honeybee swarms are likely to occur. Swarming is the honey bee’s natural reproductive behaviour, so if people see a large group of bees hanging from a branch or in a cluster on the ground it is best to contact the British Beekeepers’ Association to find a local swarm collector (www.bbka.org.uk/swarm  ).

Clive added: “Bumble bees may look and sound menacing, but they rarely display aggressive behaviour and just want to get on with their own business. This is true of a number of solitary bee species. They all play a vital role in nature. In many cases, their activity should be encouraged to continue without interruption. If they are being a nuisance, then it is best to leave them to it, although it may be possible to ‘move’ them to a more convenient location. We always urge people to call us or a BPCA registered pest control company for advice.

“It is vital to try to protect all bee species so we encourage responsible pest management within our industry while educating customers on the benefits of bees as pollinators, their behaviour and their lifecycle, encouragingcustomers to consider the alternatives to destruction and we always advise contact with the British Beekeepers’ Association when people encounter honeybee swarms – or request that solitary and bumblebee colonies are allowed to complete their activities without interference.”

People are also being urged to leave flowering weeds in their gardens such as dandelions as they provide an excellent source of pollen, particularly later in the year when the blossom has gone. Weed killers should not be sprayed on flowering weeds as it will kill bees that try to collect pollen.

Cleankill Pest Control has been providing pest control services to London and other parts of country since 1995. Set up by former industry colleagues in 1995, Cleankill was founded upon the desire to create a company that placed customer service, respect for the environment, care for the community and staff development on an equal footing with profitability.

Cleankill Pest Control deals with ‘distress’ pests such as wasps and fleas, as well as preventative maintenance against public health pests such as mice, rats, cockroaches and birds. The company prides itself on fast and efficient service delivery and aims to be recognised as a market leader for innovation, ‘green’ and new pest control techniques. For further information go to www.cleankill.co.uk  or call 0800 056 5477.