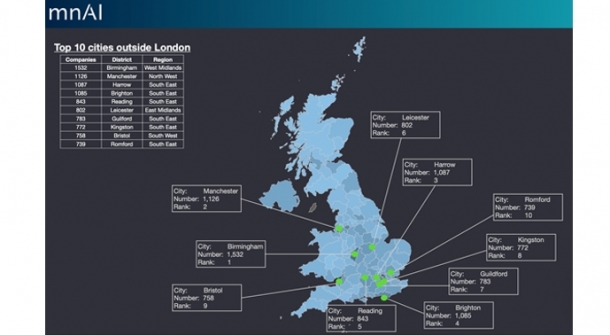 Award-winning data platform, mnAI, have uncovered the top regions outside of London for fast growth female led businesses. The data outlines the most prosperous areas for women to excel in the business world and the leading industries in the last decade.

Based on a criterion of companies that are under ten years old, with a 71% shareholder growth in the last three years, there are 57,173 female-led companies that match these conditions in the UK, of which, 2,420 are businesses in Scotland.

The most common Director age amongst female-led businesses under 10 years old with 71% shareholder growth over three years is 38 years old, followed closely by 42-year-old Directors.

mnAI have also analysed the top ten towns/cities outside of central London with the largest population of these fast growth female-led businesses in 2021:

Of these ten towns/cities, seven are in the South of England, with just two in the Midlands and one in northern England. Birmingham has the largest number of businesses that fit this criterion, with 1532 companies, followed by Manchester at 1126, and subsequently Harrow, with 1087 female-led companies in this category.

Within the highest volume town/cities for fast growth female-led businesses, the most popular industries are Professional, Scientific, and Technical companies (such as legal services), followed by Human Health and Social Work, and Administrative and Support Service businesses.

For a more detailed list of the statistics, contact Sales@mnai.tech, or book a free demo at https://www.mnai.tech/request-demo.