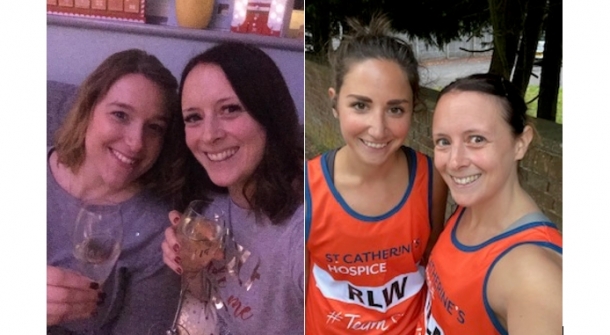 For Laura Lyons, losing her beloved friend Rachael was one of the hardest things she’s ever had to go through. Now, she and her friend, Lia, plan to take on the Run Reigate Half Marathon in Rachael’s memory. Here she shares how Rachael inspired her to take on this amazing challenge.

“Rachael and I met through our youngest children who went to the same child minder. We used to see each other in passing at drop off, but never really spoke aside from the odd ‘hello’ at first.

Then, just before her son’s second birthday, he was diagnosed with cancer - that was the start of our real friendship. Thankfully, he’s better now.

Rachael was diagnosed with cancer in 2019

She texted me to ask if she could come round and it was then that she told me she had cancer.

She was in and out of hospital. Sadly, due to complications she was unable to receive any further treatment. We always knew that she wouldn’t get better and that was something I struggled to get my head around. I think one of the hardest things was not understanding the full extent of her illness.

It reached a point where Rachael felt that she had had enough, and the doctors agreed that it was probably time

Her husband, Tim, text me to ask if I could come to see her one last time so that we could say goodbye.

I felt sick the moment I got to the hospice car park; it was one of the hardest things I’ve ever had to do. Knowing that it was final was so difficult, but the hospice was so lovely. Everyone was so friendly and always smiling – I couldn’t fault them at all.

In the end, Rachael and I never said goodbye, just that we’d see each other soon (probably with a glass of prosecco) wherever we ended up.

Once Rachael was under the care of St Catherine’s, Lia and I signed up to the Run Reigate Half Marathon.

The care and support that the hospice provided to Rachael and her family is what made us decide to run for St Catherine’s. When I told Rachael, she told me we were ‘bonkers’!

When I’m out running and I’m tired, I tell myself that Rachael never gave up.

She had two young children and did everything she could to stay with them for as long as she could. She’s mine and Lia’s motivation and we know she’s with us.

Whenever I questioned doing anything, Rachael always told me ‘you can do it’ - I think she’d be telling us that now too. On the day I know that she’ll be cheering us on, in her little Northern accent with a glass of prosecco, from wherever she is.”

To support Laura and Lia with their fundraising please visit: http://www.justgiving.com/LauraandLia.