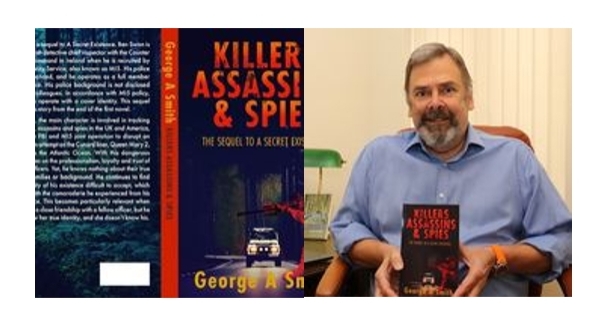 George, a retired Sussex Police Detective Chief Inspector with over 30 years police service, wrote his first novel A Secret Existence as a lockdown project. He donated royalties to St Catherine’s as a thank you for the care the local hospice is currently giving one of his daughters.

Just six months after his first book George is back with a sequel, and once again, is generously donating all royalties to St Catherine’s.

Killers Assassins & Spies follows on from A Secret Existence and features Ben Swan, a Detective Chief Inspector with the Counter Terrorism Command who is then recruited by MI5. The book follows Ben as he tracks down killers, assassins and spies in the UK and America. It also follows him as he works with FBI and M15 colleagues to disrupt an assassination attempt on the Cunard liner, Queen Mary 2. Although Ben relies on his fellow officers, he knows nothing about their true identities, families, or backgrounds. When he develops a close friendship with a fellow officer how much can he trust her?

George is former head of Brighton CID, and he was a Senior Investigating Officer on many murder investigations. During his career he operated, at Detective Chief Inspector rank, in the UK and Ireland with the Counter Terrorism Command. He was also recruited into the Security Service (MI5) and worked in the UK and USA with the FBI. As a young Detective Inspector, he was involved in the interrogation of Argentine Commander Alfredo ASTIZ during the Falklands War. He has a BA degree in history and politics and is a keen photographer. In retirement he owns and manages a 22-acre woodland in West Sussex.

George said, “Having enjoyed the writing of my first novel and encouraged by the positive response I have had from readers I set about writing Killers Assassins & Spies. When I retired, I had no interest in writing a book but now I’ve written two! It is an honour to once again donate all royalties from this book to St Catherine’s Hospice. The hospice’s community nursing team is currently supporting one of my daughters and their expert help has been invaluable.”

George will be happy to reply to any additional questions you may have. He can be contacted at RowanLodgeUK@btinternet.com.

Killers Assassins & Spies will be available to buy from Monday 11 October 2021. Paperback and Kindle versions are available from Amazon Books (www.Amazon.co.uk) and main book suppliers.