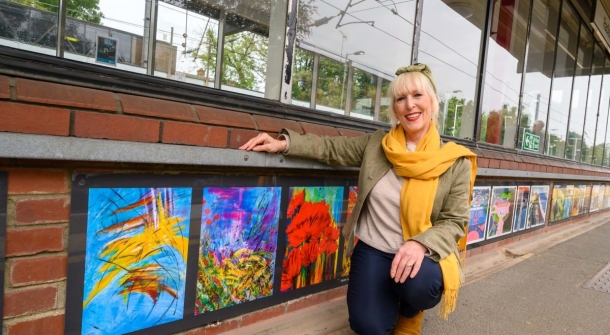 Local professional, student and hobby artists have created work for display at 40 stations, from King’s Lynn and Downham Market in Norfolk to Brighton and Newhaven Harbour on the south coast.

The train company called for the exhibits when local passengers and residents said art would be one of the best ways to improve their station's ambience. GTR worked with environmental charity Groundwork Trust, community rail partnerships, and other community and business groups to invite, brief and commission the local artists.

The huge variety of works, many inspired by local landscapes, history or personalities, include individual paintings, tiled and painted murals, metal sculptures, and historical and contemporary photography.

Together the installations create an art gallery linked by 300 kilometres (nearly 190 miles) of rail network, with exhibits in eight counties.

Some stations have enough exhibits to qualify as galleries in their own right. Stevenage, for instance, has been enriched with more than 20 paintings by students at John Henry Newman School. At Radlett, Girlguiding groups joined local professional and leisure-time artists to contribute 27 paintings. South Croydon also has over 20 works, on a theme of mental well-being, by members of art and mental health charity Studio Upstairs.

The largest individual artworks are the 47-metre mural by local illustrator Carli Pfurtscheller along the footbridge at St Neots station, and the 35m-long place-name mural,  by south London sign-writer Joe Rashbrook, on the road bridge outside East Croydon station. Hitchin’s photographic history collage by Groundwork East and North Herts Museum covers both sides of a 15-metre underpass.

The most recent installation is a series of mural panels created by local environmental artist Steve Messam for King’s Lynn. Steve's design was inspired by the iconic Campbell’s soup tin – the company established its first factory outside the USA at King’s Lynn in 1959.

[See Editors’ notes for a full list of the stations with new community art installations.]

Tom Moran, Managing Director for Thameslink and Great Northern, said: “We called out to communities to help us brighten up their stations, and we’ve been amazed by the talent of the many artists who have come forward. We’ve commissioned over 200 works in the past year – that’s enough for one in every room of the Shard’s Shangri-La Hotel!

“All the art is produced by local people, inspired by where they live. So it doesn’t just make our stations more vibrant and inspiring for our customers - it gives us an even stronger bond with the communities we serve.”

As part of its multimillion-pound, network-wide station improvement programme, GTR has also livened up the look of 90 stations with landscaping and planting projects. Again, many schemes were managed by Groundwork Trust, and several community groups have pledged to maintain the new gardens.

At 50 stations, passengers included redecorating and refurbishment in their top improvement priorities. The train companies’ make-overs have included sensitive restoration of Listed Buildings such as Battersea Park and North Dulwich in London, and what is thought to be the country’s oldest surviving wooden waiting shelter, at Ockley in Surrey.