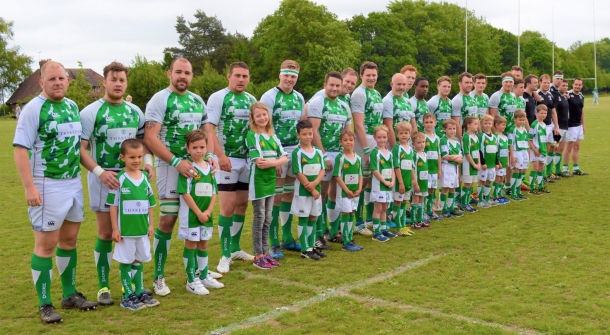 South East-based Thakeham Group has confirmed a new agreement to continue as the main sponsor of Horsham Rugby Club. But the new deal has increased the scope of the home builder’s support to include a community campaign to introduce more players of all ages to the sport.

The community creator’s lion logo will appear on the shirts of men’s first and second team shirts; the ladies’ first team and young players in the Horsham Minis from under 7 to under 11.

Thakeham, with a head office in Billingshurst, will now also support a Horsham Rugby Club Schools Outreach Programme which is currently in development. The programme will offer local primary schools coaches to run tag rugby sessions and introduce youngsters to rugby.

Thakeham became Horsham Rugby Club’s main sponsor in 2016. For Thakeham, Chief Executive Officer Rob Boughton said: “As a local business owner and employer, we have been fortunate to build a wonderful relationship with Horsham Rugby Club since we first became the Main Sponsor six years ago.

“Through the club’s resilience, we have seen first hand the difference that grassroots sport makes to people’s lives in Sussex. That’s why we were so keen to increase the scope of our new agreement to include younger teams and the wonderful Schools Outreach Campaign; all the activities that encourage more young people to play the game.

“We know just how much young players’ health and mindfulness benefits from activities on and off the pitch. We also appreciate how much team sport was missed during the various lockdowns we have lived through together. With our support, we hope the club will be able to reach even more young people who might otherwise have not been involved with the sport.”

In the far-reaching new agreement, Thakeham will also facilitate financial support for self-employed players who suffer injuries and to further improve inclusivity at the club, the new Thakeham sponsorship will see a raft of new measures to waive and subsidise membership and tour fees in case of hardship. As a leader in the UK construction industry's race to zero carbon, Thakeham will also be helping Horsham Rugby Club to realise its own ambitions to become more sustainable. Finally, Thakeham will continue as the main sponsor of the club’s Bonfire and Fireworks night.

Horsham Rugby Club’s Vice Chairman and Commercial Manager Richard Ordidge said: “This is wonderful news for Horsham Rugby club and anyone who cares about grassroots sport in Sussex. Thakeham will be the main sponsor of Horsham Rugby Club for the next three years, but we have also worked hard to build a partnership that reflects the sustainable community creation values that drives Thakeham in their own business.

“Thakeham is continuing the company’s sponsorship at a really exciting time for the club. Sponsorship is vital for us to realise our ambitions. The community-focussed support from Thakeham will make a significant difference. We have a strong responsibility to our members and are keen to attract even more local talent of all ages.”