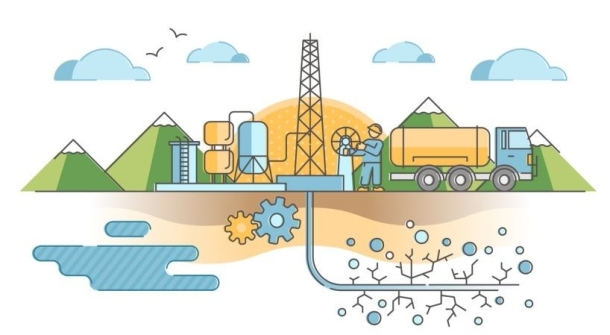 Hydraulic fracturing, commonly known as fracking, is a technology that can extract natural gas and oil from shale rock by drilling into the earth and directing a high-pressure mixture of water, sand and chemicals at a rock layer in order to release the gas inside.

The first part of the operation begins by drilling straight down into the earth and then turning the drill horizontally to run for miles underground to reach the shale rocks where molecules of gas are trapped inside.

After this, a liquid called ‘slick water’ is pumped in at high pressure which forces the cracks in the rock to widen. With the rock broken up, the gas is released and flushed all the way back up to the surface.

Why is fracking controversial?

Fracking is controversial because of the potential impacts, including:

Fracking also uses huge amounts of water, which must be transported to the site at high environmental cost.

Fracking was stopped in the UK in 2019 due to the concerns from opposing green groups and local concerns over the earth tremors. However, there have been recent calls to reconsider the ban of fracking due to the increase in the cost of energy.

The Government has said "all options" are on the table as it tries to end UK imports of Russian energy because of the conflict in Ukraine, combined with gas supply shortages.

Business Secretary Kwasi Kwarteng has asked the British Geological Survey (BGS) to consider any changes to the science around fracking.

Fracking firms claim the move is a "tentative first step" to overturning the ban and "exploiting [the] potential" of shale gas.

But other MPs and campaigners have warned against a change in direction. Labour re-stated its opposition to fracking in March 2022, when it published its energy policy.

There have been no further announcements about fracking in the Government's energy strategy.

We will watch this space!