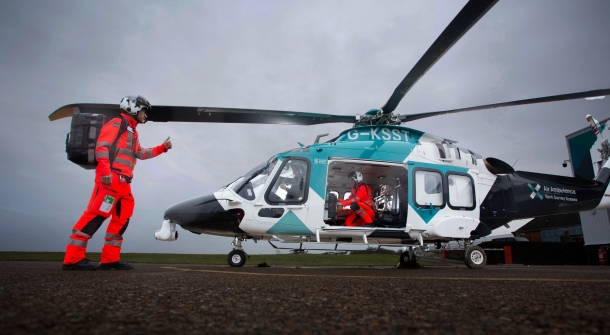 Air Ambulance Charity Kent Surrey Sussex (KSS) has reported that 2022 has been the busiest year in its 33-year history.

Between 1st January 2022 and 31st December 2022, the charity’s crews of pilots, doctors and paramedics responded to 3,224 incidents, 64% by helicopter and 36% by Rapid Response Vehicle. 947 of the call outs were to incidents in Sussex.

Road Traffic Collisions accounted for the highest number of missions, followed by medical emergencies and accidental injuries. The majority of patients were under 60 years of age.

Delivering world-leading pre-hospital emergency care 24/7 to the most critically ill patients across its region, it costs £15.2M each year for KSS to operate its life-saving service and with demand at an all-time high, the charity is urging people to support its January fundraiser, Run 31, and help raise vital funds.

Run 31 is a fitness challenge for people of all ages and abilities to run or walk a minimum of 31 miles by the end of January. Participants can do this fundraiser wherever and however they would like! Regular walkers or runners can set themselves an even harder challenge, doubling or tripling the 31-mile target and completing either 62 or 93 miles throughout the month of January.

KSS’s CEO, David Welch, who regularly takes part in KSS’s fitness fundraisers, is challenging himself to complete 105 miles across the month, the equivalent of four marathons.

David Welch comments, “KSS provides a vital life-saving service, bringing the emergency room to the scene of an incident and delivering the best possible outcomes to patients in need of critical care. Sadly, the demand for our service is at an all-time high and we need to keep fundraising in order to keep our service fully operational 24/7.”

“86% of our total income is donated and raised by our supporters and we are so incredibly grateful for the support we receive from our local communities - we would not be able to save the lives that we do without the generosity of our supporters and volunteers.

“We are now urging people to kick-start the New Year with a fitness fundraiser so that we can continue to save lives. On behalf of team KSS, I’d like to say a huge thank you to Gatwick Airport for sponsoring KSS’s Run 31 in January 2023.”

“I am taking part in Run 31 myself, to start the year with a new challenge that’s great for my fitness and wellbeing whilst also raising much needed funds. I hope people across Kent, Surrey, East Sussex and West Sussex will sign up for Run 31 and set themselves their own personal fitness challenges. We are so thankful for all amounts of sponsorship raised. All fundraisers who reach a fundraising target of £150 will be sent a medal from KSS to thank them for their achievements in raising vital funds for our life-saving charity.”

Rachael Bourne from Sussex who is taking part in Run 31 said:

“I am taking part in the Run 31 challenge because it’s a great charity to raise money for. I believe Air Ambulance Charity Kent Surrey Sussex is such an important charity because one of us may need its help one day for ourselves or a loved one and they provide such a life-saving service. This is my third year completing the Run 31 challenge and I can’t wait to get started!”

Sign up for Run 31 via the KSS website, via KSS’s Run 31 Facebook Community or kick-start your Run 31 journey by creating JustGiving fundraiser here. All participants will be sent a free T-shirt.

. Here’s how your fundraising could help: