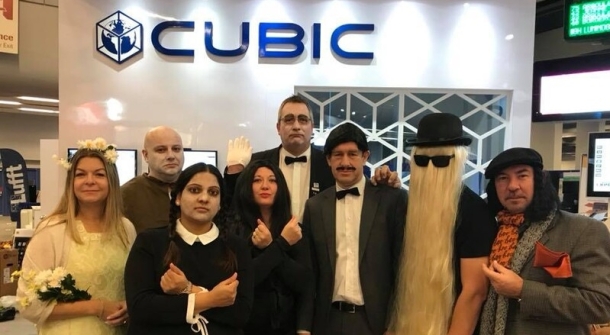 It's virtually unheard of for a millennial to stay within one company their whole working life. And yet here I am, being the exception to that rule! This month I celebrate ten years – a decade, at Cubic Transportation Systems. In that time, I've seen; the transition from a public to a private company, the implementation of contactless payments in London and globally, over 15 countries, four different presidents, three rebrands, two CEOs, and a partridge in a pear tree. But the one thing that's been consistent is the passionate teams that have powered our cities.

During this time, especially living in London, I've been incredibly proud every time milestones come to fruition which highlights just how innovative, collaborative, and people-centered we are. Here are my top moments.

The legacy of cEMV began in London Dec 2012

When I joined CTS in November 2012, there was a real buzz in the office about launching contactless bank card payments on London buses. I didn't see what the hype was about. Little did I know then that it would be a landmark deployment. One that would lead to London being the first major city to deploy contactless payments within transit to scale. One that pre-pandemic processed millions of daily transactions (around 60% of all Pay As You Go journeys) across bus, tram, tube, riverboat, train, and DLR. One that many claims they can also do to the same scale, but ten years later, I still haven't seen it done!

When you experienced contactless payments in Sydney, Brisbane, New York, Vancouver, Chicago, Miami, LA, San Francisco, it's been Cubic. And now I know why. It's hard to do at scale, especially somewhere like London, where you have millions of fare rules these transactions must adhere to and include fare capping and financial settlements. It's no easy feat, and it requires a sophisticated back office.

The genetic makeup of people living and moving around London is so diverse that they need a ticketing system to ensure 100% of travellers can use their system. They never want to leave anyone behind. And I've seen this first hand through my ten years here. In 2013 Cubic partnered with TfL and the Train Operating Companies like Southern to ensure ITSO-enabled smartcards could be used on London's network by redesigning the readers to ensure these transactions could be processed.

Later in 2017, the Rail Delivery Group led efforts to reduce the volumes of paper tickets sold by digitalised payments in the UK and enable barcode functionality so people could use mobile ticketing. I saw Cubic win multiple awards for allowing both to happen. And now, these are the tokens you can use to pay for transport in London:

Since day one, NextCity (our strategy since 2010 for the future of mobility) was drummed into me like a religion. NextCity described how the future of transport would transition from thinking about journeys in silos, as individual modes and operators, to an integrated multi-modal ecosystem. Sound familiar? Why wouldn't it? It's the strategy to achieving MaaS, before MaaS was even widely known and spoken about in the industry.

To mobilise NextCity, in 2013, we acquired a part of the SERCO group called ITMS, which led efforts on traffic management within London. After all, how could we solve mobility without understanding how to improve the road network?

In 2017 we enabled payments for the Santander Cycle Hire Scheme and the services to ensure availability across all 775 terminals. In January 2021, TFL reported a rise of 157% in new cycle hire memberships over 2019 and a record-breaking number of hires per day (40,000). Our teams were part of that success. And more recently, in the attempt to achieve the Mayor's strategy for reduction in carbon emissions, London has deployed e-bikes which Cubic helped to test and integrate into the ecosystem.

The opening of Cubic's Innovation Centre 2015, from gateless gatelines to Virtual Reality experiences

What does the future look like? Everyone talks about it, but we walked the walk when we dedicated space in Farringdon, London, a team, and R&D funding to truly invest in finding the answers.

This open space became home to many projects and partnerships, including our gateless gatelines, which tested biometrics as a token to travel in barrierless walkways. We also worked on VR experiences so people could experience walking around a train station with various eye problems (glaucoma, cataracts, etc.). More recently, we did a pilot to change the displays to show advertising on a gateway to access other potential revenue streams for agencies.

Account-Based Ticketing (ABT) – The future

You may have heard the phrase BYOB (Bring Your Own Bottle) to a party, and in this industry, you'll hear the play on words BYOT (Bring Your Own Token). This alludes to an Account-Based Ticketing system, where your validation for travel is based on an account, regardless of the token type you use. And, from the operator's side, the data (fare rules and logic) is managed in the cloud, not on devices like the gates and validators.

I've learned that the fundamental rule for the success of any fare collection system is the ability to provide payment options for 100% of users. Why bring a contactless bank card if the closed-loop ABT system can't process it? Why bring a smartcard that can't be used to pay for trains? You can deploy ABT systems that still leave a lot of travellers without a means to pay.

I've seen London build the foundation and lead the way in the technological revolution. I'm so excited to see a successful ABT system deployed in London in the near future. Just like Cubic did in Chicago in 2013 and more recently in New York, Brisbane, and San Francisco.