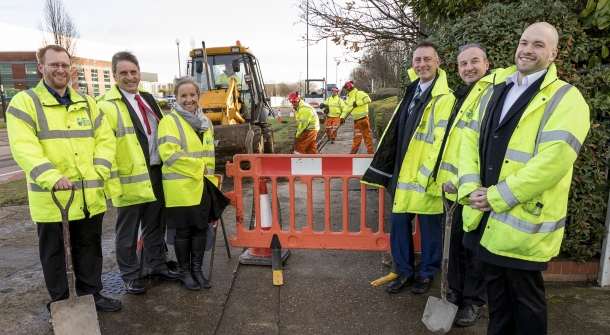 Pavements in Manor Royal Business District are set for significant resurfacing works thanks to additional investment from West Sussex County Council in connection with the Crawley Growth Programme. Over the next few weeks, footpaths along Manor Royal, Fleming Way, Kelvin Way, Newton Road, Priestley Way and Rutherford Way will be improved by replacing old flagstone paving with new tarmac to support walking and cycling.

The works are supported by the recently announced £60m Crawley Growth Programme to unlock new jobs and employment space, which has benefited from a £14.6m contribution from the Coast to Capital Local Enterprise Partnership. As well as being a boost for businesses and the local economy the Crawley Growth Programme is designed to provide transport infrastructure and highways upgrades and new homes.

The news was welcomed by the Manor Royal BID, which commissioned an area-wide audit of roads and pavements last year to identify those areas most in need of improvement.  “We are delighted with this news, which is essential to the continued success of Manor Royal” said Keith Pordum, Vice-Chairman of the Manor Royal BID and MD of Bon Appetit Ltd.  “West Sussex County Council has responded very positively to our concerns about the condition of roads and pavements and this is further evidence of the importance they attach to growing the economy here.”

Stephen Hillier, West Sussex County Council Lead Cabinet Member for the Crawley District Deal, said: “This is just one project in what is a major long-term investment in the Crawley area.  We’re pleased to be able to confirm this work in Manor Royal as we know this is an important issue for businesses and local residents alike.”

Councillor Peter Smith, Cabinet Member for Planning and Economic Development at Crawley Borough Council, said: “I’m thrilled that these pavement resurfacing works are taking place in Manor Royal. The continued success of Manor Royal is critical to Crawley and improvements to the area will help to maintain Manor Royal as the place to do business, resulting in more prosperity which benefits Crawley as a whole.”

County Council contractors are set to begin work this month (December) with completion in the first part of 2018. More details of the planned works will be published on the Manor Royal website at www.manorroyal.org