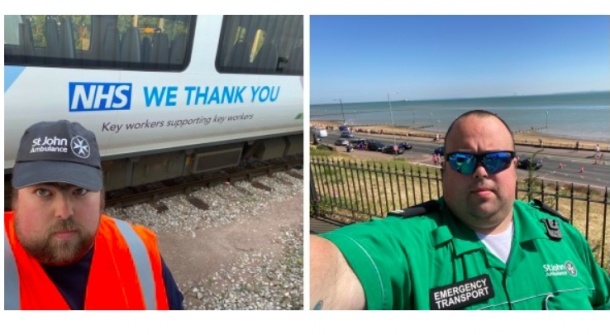 National Volunteers' Week: Meet Lee from Stevenage who has been supporting the ambulance service.

In his day job, Lee Southgate drives Great Northern trains for Govia Thameslink Railway as a shunter. But in his own time, he has been volunteering as an emergency ambulance crew member working alongside frontline paramedics.

The father-of-two has been a St John Ambulance volunteer for the last eight years and thanks to this experience and training, he has also been able to support the NHS ambulance service during a surge in demand due to the pandemic. A normal shift for Lee has been 10am to 10pm, responding to 999 calls and providing welfare to patients. Just last week, he helped save a life.

The 31-year-old, who lives in Stevenage, said: “Lots of people have been doing their bit to support the community. I'm already a key worker with work, but with those eight years’ training/skills I’ve received, I can take my volunteering to the next level and be there in someone’s time of need and make that difference from a life lost to a life saved.

“It has felt amazing to be helping, whether it’s been just being there to talk to someone or making that difference in a life-changing moment,” he added.

At work, Lee is based out of GTR’s Hornsey depot where he has been a Great Northern shunter driver for eight years. He usually gives around 1,000 hours a year to St John Ambulance mainly through his days off or in the evenings. He said: “My managers have been very supportive with what I’ve been doing and have always said they will try and help me if I need to cover extra ambulance shifts.”

Like many charities, St John Ambulance has been struggling with funding during the pandemic. But thanks to Lee the charity has had a cash injection of £1,120 after he donned a tutu and went on a fundraising bike ride. Lee said: “I ended up cycling 16 miles, doing it in five hours and for an unfit person this was a massive achievement. I did hit a few walls, but I got over them and completed it and I raised the most I’ve ever raised for anything. I can’t thank people enough for donating.”