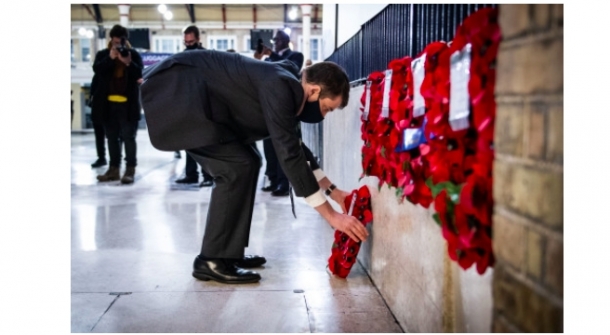 Govia Thameslink Railway, Southeastern and Network Rail colleagues at Victoria last night came together for a two minute silence to mark the 100-year anniversary of the British Unknown Warrior’s journey to the station before his burial at Westminster Abbey.

In 1920, the body of the British Unknown Warrior arrived on platform 8 at London Victoria Station from Dover at 20:32 on the 10th November and lay there overnight before internment at Westminster Abbey on 11th November.

Initial plans for a public event to mark the centenary were scaled back in order to adhere to current lockdown rules.

Chris Fowler, Customer Services Director for Southern, said, “While we couldn’t hold the memorial that was planned, we wanted to honour the Unknown Warrior to mark this important anniversary; it is a powerful reminder of the railway’s role in the First World War and the terrible impact of conflict. Colleagues on duty were able to pay their respects, while also adhering to the current rules.”

Edward Winter, Station Manager for Southeastern at Victoria, said: "While this year’s commemorative events have to be low key, we’re very proud to be able to commemorate the Unknown Warrior's journey from Dover to Victoria in this way. Passengers travelling on trains into and out of Victoria are also welcome take in the special exhibition on the Unknown Warrior over the coming week."

Nicole Cohen-Wray, Stations Director for Network Rail’s Southern region said, “The Unknown Warrior represents the selfless sacrifice of so many, who fought and lost their life in the war so that we could be free. I’m sorry we have not been able to mark this special occasion in the way we initially hoped, but proud that the railway family was able to come together to pay our respects to the Unknown Warrior, 100 years later at Victoria station.”

At 20:32 on 10th November 1920 the unidentified British soldier arrived at Victoria station in a special railway carriage. His body lay at the station overnight before he was laid to rest at Westminster Abbey the next day – the ‘Unknown Warrior’ has in the years since become an important reminder of the sacrifice that comes with conflict.

To this day, the soldier’s tombstone is the only one in the Abbey on which it is forbidden to walk. The grave is capped with a black Belgian marble stone featuring an inscription by Herbert Edward Ryle, Dean of Westminster, and was engraved with brass from melted down wartime ammunition.

A pop-up exhibition commemorating the anniversary opened this week at the station, including a series of panels created with the National Army Museum, which tells the story of the Unknown Warrior. The exhibition will be open until 16 November. For more information, go to: https://gloo.to/6MB7.