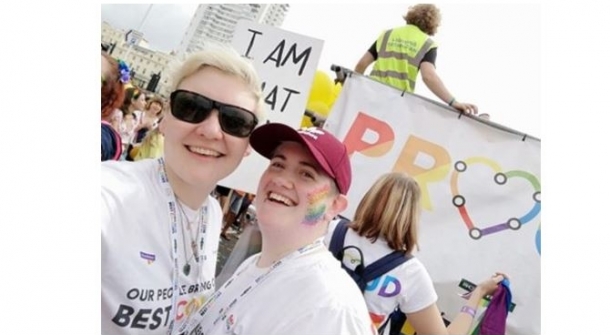 The LGBT+ Network at Govia Thameslink Railway (GTR) is preparing to celebrate Pride in a whole new way, joining the raft of virtual events from the organisers, following the cancellation of the annual Brighton & Hove Pride event due to the Covid-19 pandemic.

Swapping stilettoes and sequins for sofas and slippers, this year the rail operator’s employees will be joining Pride’s digital festival, ‘We are Fabuloso,’ featuring performances, archive footage, comedy and cabaret, streaming live from Friday 31st July to Sunday 2nd August, all from the comfort of their own homes.

With all official Brighton & Hove Pride events in the city cancelled due to Covid-19, GTR is still determined to provide support to its LGBT+ colleagues and has signed up professional drag queen Annabelle Lectar (pictured below) to host a virtual event on Friday night to kick off proceedings. Organised by LGBT+ Network co-chairs Stephanie Sauvarin and Nicola Baillie, the team can look forward to a night of ‘Show Us Your Pride’ activities after a week of online events, including an alternative Pride photo competition, quiz night and cabaret from drag queen Natasha Von Spirit, before joining the official ‘We are Fabuloso’ digital festival over the weekend.

Stephanie Sauvarin, Station Operations Manager at GTR says: “Although Pride is important for our community, we set up the LGBT+ Network to be about much more than that. Our main focus is on education and creating a safe space at work where people can come and learn and ask questions in an open environment. Interestingly, we’ve seen a lot more people wanting to join the network since lockdown begun, so it is vital for us to continue providing support and we’re really looking forward to the virtual ‘Show Us Your Pride’ week.”

Pride isn’t the only thing Stephanie will be celebrating, having recently asked her partner and joint LGBT+ Network co-chair Nicola Baillie, to marry her. The couple met through work early last year and hit it off straight away. After a couple of months dating, Nicola asked Stephanie to be her official girlfriend accompanied by a romantic delivery of a dozen red roses.

“I knew I had to do one better than that this year as it approached our one-year anniversary,” says Stephanie. “We had already decided to get engaged and were in the process of having our rings designed but like everywhere, the jewellers had to shut during lockdown. I was heading home from work on the day of our anniversary and I just knew that I wanted to propose that evening – engagement ring or not. I stopped at our local corner shop and picked up a bag of Haribo so that I could use the jelly ring to propose! This year’s been horrible and really unexpected, but it’s made me realise that I wouldn’t want to spend it with anyone else.”

Nicola Baillie, who is a Health and Safety Manager for Southern and Gatwick Express, accepted the surprise ring - shortly before eating it herself - but still owes her new fiancé a holiday. “I’d organised a trip and knew exactly where I was going to propose to Steph, so the fact she decided to just go for it and get down on one knee really surprised me – it was a lovely gesture. She hasn’t dropped the holiday thing yet though, so I think we will still be going on one when we finally get our hands on the actual engagement rings!”

With no official Pride events taking place this year, Paul Kemp, Director of Brighton & Hove Pride, said: “Brighton & Hove Pride is a time to come together to celebrate and embrace diversity and inclusion in our great city, and just because we are not able to meet in person doesn’t mean we can’t support and celebrate our fantastic LGBTQ+ communities. We have 3 amazing shows over the Pride weekend that will feature exclusive never-before seen footage from the main stage as well as fresh new content recorded in our Brighton studio, cabaret, comedy, drag, queer politics and much more.

“The Brighton Rainbow Fund and the many local charities and community groups they support reply on the fundraising income over the Pride weekend for their year-round activities, so we really hope everyone joins in the Fabuloso online fun and gets behind this fundraising effort,” he added.

Trains to and from Brighton and the surrounding stations will be extremely busy on 1st and 2nd of August, with significantly reduced capacity to support social distancing. Queuing systems will be in place and anyone travelling must wear a face covering, in line with government guidelines. Check before you travel at www.nationalrail.co.uk

With a thriving LGBT+ Network made up of colleagues and advocates from across the organisation, Brighton & Hove Pride is usually a weekend of celebration for the rail operator, having last year launched the Thameslink ‘Trainbow’ and colleagues taking part in the parade on the company’s first float, emblazoned with ‘Our People Bring Out of Best Colours.’