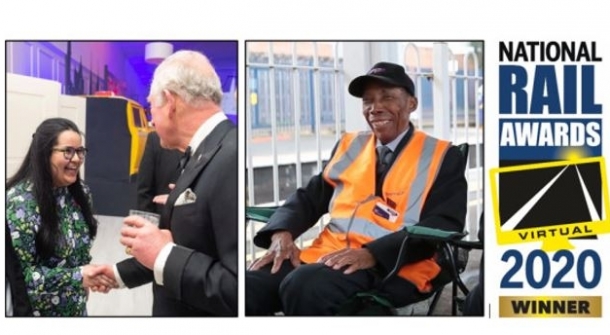 Two Govia Thameslink Railway station assistants at the opposite ends of their careers have each won a major national rail award for their outstanding contribution in helping passengers, while Southern Railway was highly commended in the category Passenger Operator of the Year, and GTR for the introduction of more than 1,500 new carriages worth over £2bn.

Thameslink's Siggy Cragwell, aged 80, has worked on the railway since the day after he landed in England as part of the Windrush generation, 57 years ago. He gets up at 4am to do the 6-11am shift as a platform assistant dispatching trains at Elstree & Borehamwood station and then goes to the gym to practise Tai Chi and Taekwondo, to keep him fit for cricket – which he still plays at an international level!

Thameslink passenger Nigel Gale said as part of the award submission: “Siggy is a beloved dispatcher at Elstree & Borehamwood station during the morning peak, and although I try to speak to him daily, he has become so popular that even getting a couple of moments to say hello is becoming difficult.

“He is such a warm and friendly gentleman, always ‘can-do’, regardless of the situation, always making it clear to customers that he is on their side, which makes them valued and helps to vent frustration when things go wrong.”

Siggy said on learning about his award: “I am very happy about it. I like to talk to people and that's why I like the job. I'll keep going going until they tell me I can't work!"

Southern's Najla Almutairi, 28, a station assistant at London Victoria station, was a "stand out winner", beating entrants from across the UK to be crowned with the National Rail Award for Outstanding Personal Contribution (Frontline).

Najla found work with Southern through the Prince’s Trust ‘Get Into Railways’ programme, run in partnership with Govia Thameslink Railway now for six years. She was looking for a way to help her better support her mum and siblings after her mum fell seriously ill.

Najla was so impressive, she was made a Young Ambassador for the Prince’s Trust, a role described by the Trust as being reserved for its “most inspirational young people”.

Paul Casey, a regular commuter, posted on the Southern Railway LinkedIn page: “Najla is a fantastic lady and a valuable member of the Southern Railway group staff. As a regular commuter and a wheelchair user, it is through the assistance of Najla and her colleagues that I am able to access rail travel the same as anyone else. Najla, you are a star.”

Najla has been on long-term leave over lockdown but said she really misses her team and hopes to be back at work very soon She said: "I was full of joy when I found out I won - the award came at the right time I've been through a lot this year - I was feeling a bit down and then something like this comes along and gives you a big uplift to carry on - so I really needed it and makes me so happy."

Govia Thameslink Railway was also highly commended at the National Rail Awards in four other categories (see editor's notes): Passenger Operator of the Year (Southern), Fleet Excellence (for the introduction of £2bn-worth of new trains), Innovation of the Year (for automatic train operation in central London, with Network Rail and Siemens), and Small Station of the Year (Downham Market).

Thameslink Managing Director Tom Moran said: “It’s the people on our railways who make us what we are and Siggy has a passion and talent for customer service, day in, day out as our passengers have testified. I am delighted he has been recognised in these prestigious national awards."

Southern Managing Director Angie Doll added: "I am thrilled to see Najla win this major UK award. Najla joined us through the Prince's Trust and has been such an inspiration to us all with her amazing customer service that she is now one of their Young Ambassadors.

"I am also very pleased that the hard work by all my colleagues at Southern has paid off to see them highly commended in the category Passenger Operator of the Year following significant improvements in punctuality and customer satisfaction. That's a huge achievement."

GTR Engineering Director Steve Lammin said: "Our £2bn programme to introduce over 1,500 new train carriages has halved the average age of our fleet, giving passengers a truly transformed journey with benefits such as air conditioning, Wi-Fi and real-time information on board."

MySQL server has gone away