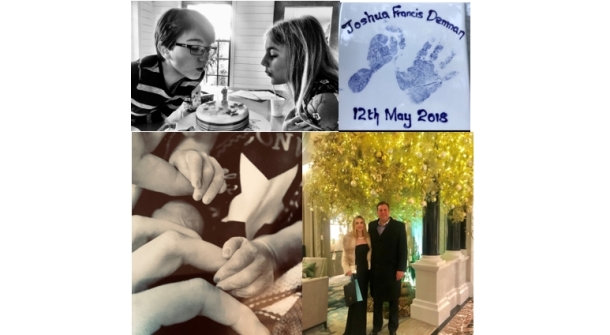 In 2017, Fiona fell pregnant with her third child, Joshua. Throughout the pregnancy, Fiona, who had two children, Benjamin and Lottie, at the time, knew that something was not right. “I was complaining of no movement throughout my pregnancy, so, at eight months pregnant I went for a private scan” says Fiona. “They soon rushed us for an MRI scan where we found out that Joshua had brain damage due to Toxoplasmosis.”

“When you have the news your baby has no chance of life, it seems, at that moment, that you’re the only person in the world hurting. The silence around you becomes intense and the outside world becomes a blur.”

In May 2018, Joshua was stillborn, “Joshua’s birth was silent, even though I knew he would be sleeping, I still waited for a cry, and there was nothing.”

At this difficult time, the family were supported by their local children’s hospice, Chestnut Tree House, where they were able to spend some special time with Joshua and say goodbye in their own way. “I will forever be grateful for Chestnut Tree House. They gave me time to spend with Joshua and do all the things I’ve done with my other children – read a book, change his clothes and spend time cuddling him.

“The staff were incredible, they had so much respect, not only to me but for Joshua too. It was the simple things that made such a difference. They would talk to him, spend time with him, and even knock on the door before entering the room.

“Chestnut Tree House is so special to us. We have a pebble in the gardens there with Joshua’s name on, and it’s the place where we go to reflect. It is where Joshua spent his final days on earth.

“Giving birth to a precious child that you have carried and dreamed about raising, knowing they have no chance of life, is the worst thing ever. I don’t think we would have got through what we have been through without Chestnut Tree House. They gave us the strength to pull through in such a difficult time.”

Every year, the family celebrates Joshua’s birthday in his memory, “We have cake, candles and have a tea party in his memory. Joshua is very much part of our family home, and we are lucky enough to have his birth certificate and photos of him around our house.”

Speaking about why she wanted to share Joshua’s story, Fiona says, “The hardest thing I’ve ever faced was leaving hospital after birth without my baby. There is always, and always will be, an emptiness I carry, but I want to make Mothers and Fathers know that they are not alone.”

If you are affected by Fiona’s story and would like to talk to someone please email hello@chestnut.org.uk