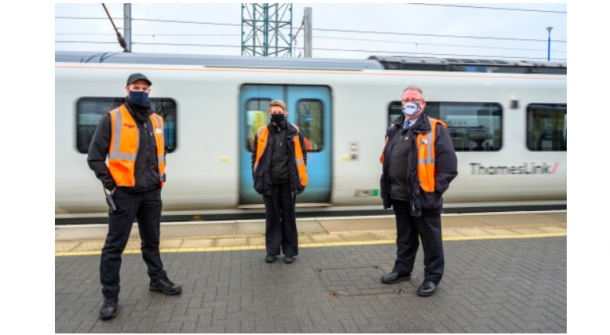 Govia Thameslink Railway and the Samaritans are highlighting how taking the time to talk could be life-saving, as the nation approaches ‘Blue Monday’ on 18 January, said to be the most difficult day of the year.

Replacing ‘Blue Monday’ with ‘Brew Monday’, the train firms of GTR - Great Northern, Southern and Thameslink - will be working with the Samaritans to turn 18 January on its head and into something positive by encouraging the public and colleagues to get together over a warming virtual cuppa and have a chat this winter. Open embedded media in the browser

A special animated illustration by renowned children’s author and illustrator Charlie Mackesy is being displayed across GTR’s digital station screens and on social media all week (from 18 January) to encourage people to have a virtual cuppa and a chat https://youtu.be/H4psL3NUR14

Julie Bentley, Samaritans’ CEO, said: “We’re so grateful to the rail industry for their support of Brew Monday this year. The challenges that many people face during this season have been felt even more acutely this year with the pandemic restrictions. At Samaritans, we know how powerful talking and listening, even if it is virtually, can be. It doesn’t have to be a Monday or a cup of tea, it’s about taking the time to really listen and supporting one another, which could potentially save a life.”

GTR Suicide Prevention Manager Laura Campbell said: “The third Monday of January can be difficult. Christmas and New Year’s celebrations are long gone, credit card bills are landing on the doormat, days are short and cold and – worst of all – we’ve a Covid pandemic and national lockdown.

“As well as promoting this great Samaritans initiative to passengers across our network, we’ll be encouraging our own staff, who are out on the front line, to share a socially-distanced or virtual cup of tea with British Transport Police and Network Rail colleagues, while keeping the service running for other key workers.”

The initiative comes after almost 60 GTR colleagues were recognised with Samaritans-sponsored Lifesaver Awards for their compassion and bravery in putting their Samaritans’ training and listening skills to the test by helping vulnerable people to safety.

GTR’s rail staff often find themselves on the frontline of helping those most in need. Last year alone, they made more than 300 lifesaving interventions, either through conversations or physically intervening when someone tried to take their own life.

Laura explained: “Starting a conversation with someone who is trying to hurt themselves or someone who feels they want to end their life isn’t easy. That’s why it’s so important that we recognise those who go out of their way to help.

“It's been a challenging year for many of us and showing some compassion and a willingness to take time to listen could be all that it takes to get someone the help they need to put them on the road to recovery, which is the essence of Samaritans’ Brew Monday campaign too.”

You can read about some of GTR’s lifesavers here:

2. Station Assistants Sarah Day and James Moore and Station Supervisor Tony Jackson – all have helped people to safety when they tried to take own lives. Read Sarah, James and Tony's story here.

4. GTR is the only train operating company to have a dedicated Suicide Prevention Manager. Read Laura's story here.

5. Kelly Holyoake is a train dispatcher, but her role sees her dealing with vulnerable people everyday. Read her story here.