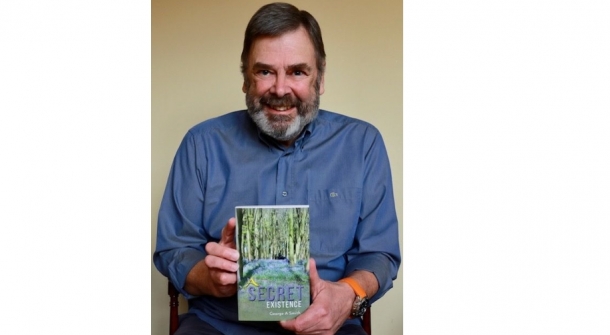 George, a retired Sussex Police Detective Chief Inspector with over 30 years police service, has been writing his first novel as a lockdown project. The book has been in his mind for several years but until lockdown he never found the time to put pen to paper.

A Secret Existence follows Ben Swan, a Detective Chief Inspector seconded to the UK Counter Terrorism Command when he is recruited by MI5. Given a new cover identity, Ben isn’t permitted to tell family or friends of his new role, which involves tracking down terrorist groups intent on initiating a major bombing campaign; and investigations into the activities of international criminals operating in the UK. In this dangerous work Ben relies on the professionalism and trust of his fellow officers. He knows nothing about their true identities, families or background though, and finds the anonymity of his existence difficult to accept.

During his own career, George spent five years as Head of Brighton Criminal Investigation Department (CID). He had success with numerous major criminal investigations, including fraud, murder and counter-terrorism.

He was also the first serving UK police officer to be seconded to the Security Service (MI5). This required special dispensation signed by the Home Secretary. During his secondment, he spent two years in the Counter Espionage Department, including working in the USA with the FBI.

Earlier in his career, as a Detective Inspector, George held the position of  Director of Detective Training, where he introduced the HOLMES (Home Office Large Major Enquiry System) system into the Sussex Force.  As an operational Detective Chief Inspector, he continued to lecture detective courses on Major Crime Investigation and Homicide.

As a retirement hobby George owns and manages a 22-acre woodland on the outskirts of Petworth, West Sussex. In his novel the main character’s house is located within a woodland. The photograph on the book cover is of his own woodland.

George said, “Following my retirement I had no interest in writing a book. Then several years ago my mother telephoned to say she had been at a Women’s Institute committee meeting and had suggested her son would, no doubt, be willing to talk about his police career. I couldn’t refuse my mother! I ended up presenting ‘My Life of Crime.’ I enjoyed the research and preparation, which sowed the thought of one day writing a novel. Now it’s done, I’ve chosen to donate my royalties to St Catherine’s because their community nursing team is currently supporting one of my daughters.”

A Secret Existence will be available from Wednesday 31st March. You can pre-order your copy on Amazon now by visiting: https://tinyurl.com/ndbsacsh