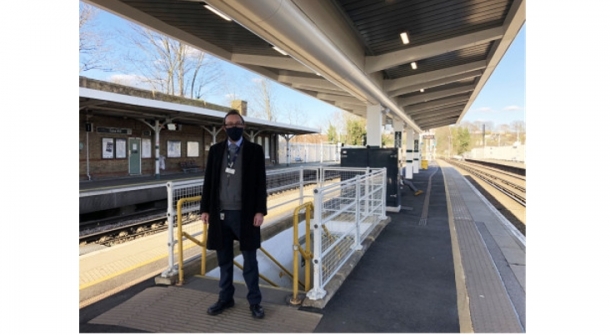 Southern and Thameslink passengers returning to Tulse Hill station when travel restrictions are lifted will enjoy a package of comforting improvements. New features include a platform canopy, seating, new stair railings and an upgraded CCTV system.

The centrepiece is the 56-metre-long canopy over platforms 2 and 3, built by Southern and Thameslink’s parent company Govia Thameslink Railway (GTR) with funding from Network Rail.

GTR completed the main structure in three weekend shifts last autumn. Contractors planted seven steel pillars into the platforms, each three metres high and weighing three-quarters of a tonne. They then craned the roof sections into position on top. The canopy’s modular design means it can be extended in future.

Electrical engineers have now fitted, tested and switched on the canopy’s lighting and CCTV equipment. The CCTV system has been extended and updated from analogue to digital.

GTR and Network Rail are confident that the new canopy signals a fresh chapter in Tulse Hill’s history. The station has not been lucky with its past platform covers, which suffered structural issues through much of the station's history. The original Victorian roof was demolished in the early 1900s because of safety concerns. The Edwardian replacements had no foundations so their supports gradually subsided.

The most recent of previous canopies, dating from British Rail days, had already been partially dismantled because of its ageing condition and outdated design. It was taking up more platform space than necessary and obscured the view of some information screens.

Chris Fowler, Customer Services Director for Southern, said: “I’m very happy to see these much-needed improvements. They mean a better journey experience for our customers who need to travel currently, and a warmer welcome for others when they return as restrictions ease.

“On behalf of all customers I thank Network Rail for their major funding contribution here at Tulse Hill, supporting our network-wide, multimillion-pound station improvement programme. We’re making more than 250 stations better places to pause in and pass through.

"Many of the 1,000-plus projects were suggested by customers and local communities. At Tulse Hill, for example, to complement the new canopy we’ve redecorated the ticket hall and waiting room, and added extra benches. We’ve salvaged and recycled railings from the abandoned Selsdon station for the stairs here. And there’ll also be a community noticeboard.”

Shaun King, Network Rail’s Route Director for their Sussex region, said: “The new canopy is an important part of the upgrades at Tulse Hill station that will make the station safer while providing a better experience for passengers. It’s vital that we continue to modernise the rail network so that we can build back better, stronger and more reliable than ever before.”