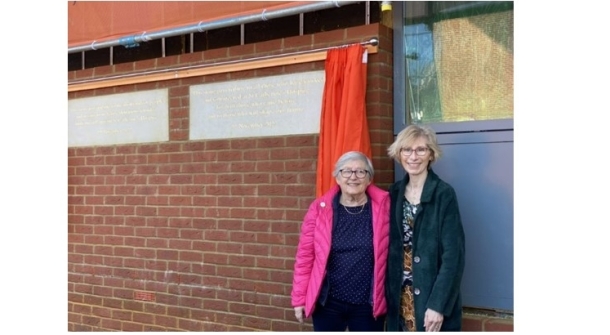 St Catherine’s Hospice marked a milestone moment on Wednesday 9 November by unveiling two new foundation stones at its new hospice site in Pease Pottage. The event was 40 years to the day since Her Majesty Queen Elizabeth the Queen Mother laid the original foundation stone at its Malthouse Road, Crawley, hospice in 1982.

Hosted by St Catherine’s Chairman Terry O’Leary, local dignitaries, key supporters, staff and volunteers attended the ceremony on the site of the new £19.5M hospice which is due to open in Autumn 2023.

The first foundation stone to be uncovered paid tribute to all the people and organisations who have been instrumental in founding, building and sustaining the hospice over the last 40 years and into the future. It was unveiled by Sir Richard Kleinwort, Trustee of the Ernest Kleinwort Charitable Trust and Sarah Bray, Chair of the New Horizons Appeal, who have supported the hospice since its very beginning.

The second foundation stone paid tribute to everyone who has worked and volunteered at St Catherine’s and to those who will shape its future, thanks to their loyalty and hard work. This stone was unveiled by Ann Dutton, St Catherine’s longest serving volunteer who joined two weeks before the Malthouse Road hospice opened, and Senior Specialist Nurse, Jackie Chipps, the longest serving staff member, who has provided expert care for 31 years.

The new stones were proudly revealed alongside the original St Catherine’s foundation stone which been relocated from the current hospice building on Malthouse Road.

Terry O’Leary said, “Forty years ago on 9 November 1982, Her Majesty Queen Elizabeth the Queen Mother laid this foundation stone at our Malthouse Road site and around a year later St Catherine’s admitted our first patients at what was then our state-of-the-art new hospice.

“Today we are celebrating the people who make our work possible - the generous people of West Sussex and East Surrey whose donations enable our work and the amazing staff and volunteers who care for those in our community when they most need that care as they approach dying and death.

“I became involved with St Catherine’s back in 2013 with my wife, Jenny, who had been diagnosed with terminal cancer and subsequently died in the care of the hospice the following year. I will always be deeply grateful for the way St Catherine's helped us through that difficult and anxious time. I continued my involvement after Jenny’s death and then in 2016 I was appointed to the role of Chair of Trustees.

“I inherited the early stages of the ambitious plan which has taken us to where we are today and will transform how we deliver care. There have been times through the twists and turns of the past six years when I have wondered if we would get here, particularly during the significant challenges posed by the pandemic.

“But we have, and we’ve done so thanks to the generosity of our donors, the support of our community and the tenacity and determination of our talented staff.

“Over 40 years ago, a group of local people showed their own tenacity and determination and drew on the support and generosity of our local community to build Malthouse Road where many of us will always have fond - and sad - memories.

“Today we remember our founders with admiration and with gratitude as we build, literally, the next important phase in the history of St Catherine’s.”

St Catherine’s Hospice provides end of life care and support to terminally ill people and their families across Crawley, Horsham, East Surrey and Mid Sussex. For further information or to make a donation visit stch.org.uk