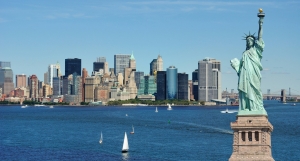 British Airways customers flying from Gatwick will soon be able to wing their way directly to the U.S. East Coast when the airline starts direct flights to New York next year.

From May 1 British Airways will fly customers in style from less than £400 return, to the city that never sleeps. Customers will travel on a three-cabin Boeing 777, offering a choice of 40 seats in Club World, 24 in World Traveller Plus and 216 in World Traveller.

It will make British Airways the only airline to offer flights to New York from all three of London's main airports; Gatwick, Heathrow and London City.

"New York is British Airways' flagship Atlantic route and will always be one of the most popular destinations for holidaymakers and business travellers alike. The flight will offer fantastic connections to our extensive network of short-haul flights to 112 destinations across Europe.

Customers on board the new transatlantic service can enjoy fully-flat seats in Club World, fine dining, complimentary drinks and a generous baggage allowance.

The new daily New York service is just the latest in a range of new holiday-friendly routes started and available this year from Gatwick by British Airways, including flights to Cagliari, Madeira, Seville, Sharm El Sheikh and Vienna.

Travellers to South America from Gatwick get a new route to Costa Rica when British Airways starts twice-weekly non-stop flights to the country's capital, San Jose, on April 27, 2016.

And the only direct flights between Lima in Peru and Gatwick, start on May 4, 2016, with a three times a week service.