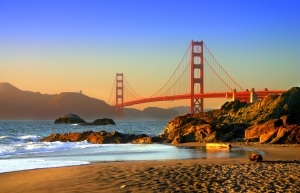 British Airways is launching a new service to Oakland, San Francisco Bay from March 28, 2017. It will be the airline's first route from Gatwick to California, and its fifth service from London to the 'golden state'.

British Airways is launching a new service to Oakland, San Francisco Bay from March 28, 2017. It will be the airline's first route from Gatwick to California, and its fifth service from London to the 'golden state'.

The airport will also provide easy access to other parts of the Bay area, in particular San Francisco which is just a 30 minute ride by train or a 34 minute drive by car.

The route will be served by a 777-200ER aircraft operating four-days a week, with flights launching from £189 each way based on a return fare in World Traveller, £448 in World Traveller Plus and £998 in Club World available to book on ba.com

Colm Lacy, British Airways' Head of commercial at Gatwick, said: "We're very excited to open up California to our customers in the Gatwick area and position British Airways as the number one European carrier to the Golden State. Boasting 260 days of sunshine, award-winning restaurants, some of the world's best wine, a buzzing tech industry, great sports teams and world-renowned tourist attractions - there's something for everyone.

"We are confident this route will be a big hit with British tourists, especially with each way launch fares from £189 and return flights and car hire packages from £539 per person."

The City of Oakland is well connected to a number of destinations and attractions, including: (by car)

For those wanting to hit the road British Airways Holidays has the following fly-drive packages on offer:

For more information or to book a flight or holiday, please visit ba.com