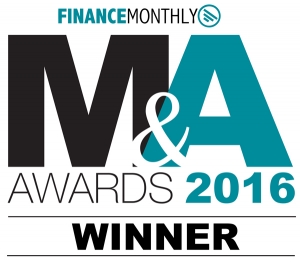 Dorking based M&A Advisors, Leith Mergers and Acquisitions Limited (www.leithma.co.uk), are delighted to announce that they have recently been awarded two industry awards.

Dorking based M&A Advisors, Leith Mergers and Acquisitions Limited (www.leithma.co.uk), are delighted to announce that they have recently been awarded two industry awards.

Every year the Finance Monthly M&A Awards recognise and celebrate the achievements of dealmakers, management teams, financiers and professional advisers who, over the 12 months, have demonstrated their deal making excellence when working on some of the most important deals across the globe.

All of our M&A Awards winners have demonstrated a deep understanding of market conditions and market forces, thus proving why the demand for expert dealmakers continues to increase year upon year.

This award was followed early this month by news that Leith M&A has also been awarded, 'Regional M&A Advisory Firm of the Year' at the ACQ5 Global Awards 2016. Jake Robson, Group Editor of ACQ5 says,

"ACQ5 Global Award winners always represent the best of breed in the industry and have earned these honours by standing out in a group of very impressive finalists. Only nominees receiving an average 4-star rating or above achieved short-list status resulting in the 75,246 readership awarding Leith M&A UK Regional M & A Advisory Firm of the Year 2016."

Leith M&A's Managing Director, David Nelson commented, "We are incredibly proud to be recognised as a leader in the provision of quality M & A advice and thank the readers of ACQ5 and Finance Monthly for these accolades."