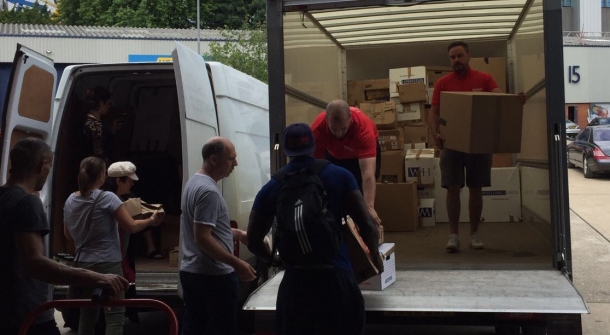 The operations manager Darren Sawyers headed to Grenfell Tower site on Wednesday 14th June to see if there was anything we could do to help at this catastrophic time.  Darren contacted the local council but felt he couldn’t wait for their response so spoke to a lady called Miranda at the Notting Hill Methodist church who is a teacher at a school attended by children from the tower.   The church was overwhelmed with the amazing and kind donations of food and clothing so Darren offered free storage so the items could be looked after in a secure and dry location until the volunteers are able to establish the best way to get the donations back into the community.   I travelled up with Darren on Friday 16th June in a Luton van and met two other colleagues at the site so we could move the donations to our storage location.  We were expecting to load the items ourselves but the community came together and very quickly a chain of people formed to help move boxes from the basement area up to the road allowing us to fill four full Luton van loads.

Being so close to Grenfell tower was a surreal experience and very emotional.  I felt myself turning away from the tower, unable to look at it and instead concentrating on the uplifting community spirit of people coming together and helping as much as they could.  I cannot begin to imagine how scared people were on the day.  Such a devastating time and our thoughts are with everyone involved.