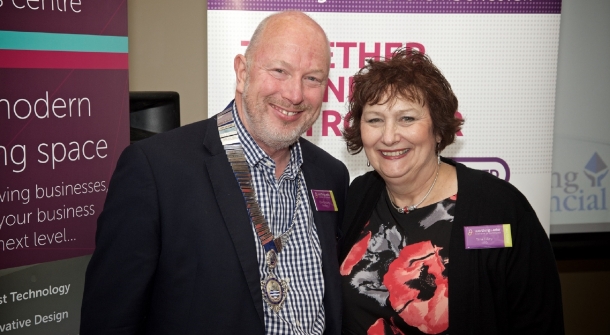 Chris Coopey, Partner and Practice Director of MHA Carpenter Box, has been appointed as the new President of the Worthing & Adur Chamber of Commerce, succeeding Peter Bennett who has led the Chamber as President for the last 14 Years.

Chris has had enjoyed a variety of careers, initially in design engineering, before moving on as a telecommunications engineer and during this time, he also served with a Royal Signals territorial unit for a number of years. In 1994 he qualified as a solicitor and later became Partner and Practice Director at Wynne Baxter Solicitors in Brighton. Chris embarked on his current role in 2005 at the Worthing-based firm of chartered accountants, tax and business advisers.

Chris firmly believes that Worthing & Adur is an amazing place to undertake business and commerce. The area has an astonishing number of world leading companies who are often at the forefront of innovation and generate countless other opportunities which have seen the blossoming of a local supply chain providing opportunities for many. Perhaps a little more controversially, he believes that the area succeeds as a business destination despite the lack of government investment in infrastructure and that given its fair share it could do even better.

Chris commented: “I’m honoured to have been elected as the new President and relish the job of representing the interests of Chamber members in the name of better business. My ambition for the Chamber is for it to really influence and drive the decisions that are central to the wellbeing of our local economy. I’ll try to do that in a collaborative style, taking into account the views of the Executive and by engagement with members and external bodies, both local and national.”

Tina Tilley, Chief Executive Officer of the Worthing & Adur Chamber, added: “We are sure Chris will help the Chamber and its members to meet the challenges and take advantages of the opportunities that lie ahead. We have a wealth of volunteers in the Chamber Executive and membership ready to support him, and I am looking forward to us working together to make sure the voice of business is heard loud and clear on the many issues on which we should be engaging.”