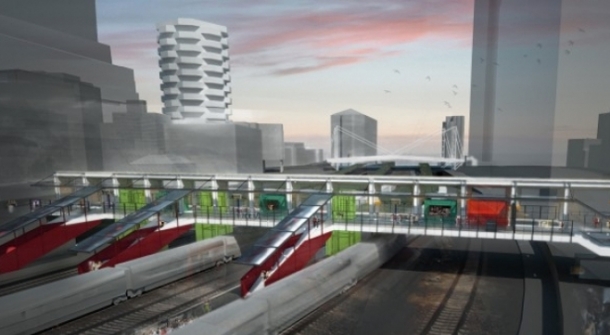 Unblocking bottlenecks at East Croydon station – and the complex junction north of the station - could release up to eight new trains an hour on the Brighton Main Line (BML) and help to secure 13,000 new jobs by 2025, according to a report published today by two former ministers.

The report – commissioned by the Gatwick Growth Board - recommends that East Croydon station is redesigned to create two new platforms – and that flyovers are used to untangle Windmill Bridge Junction where routes to London Bridge and London Victoria divide.  Without these changes, both bottlenecks will prevent the full capacity on the BML being realised and will continue to affect the performance of existing services.

The report also highlights the urgency of securing this project as the land required could be lost to the significant developments planned as part of the major regeneration of Croydon.

Jointly chaired by former Transport Secretary, Steve Norris, and the minister who delivered the London Olympics, Baroness Tessa Jowell, the Gatwick Growth Board has an objective of ensuring that areas across the region capture the regeneration benefit from the growth of Gatwick Airport.

Today’s report, produced by Arup, examines the transport connectivity required to realise this economic regeneration and deliver the 13,000 jobs that would be generated across the region and the rest of the UK from the growth of a single runway Gatwick to 2025 (the geographic breakdown of jobs growth is provided below).

The report also highlights the importance of improving the region’s roads including  Highways England’s committed plans for a Smart Motorway on sections of the M23 to provide a permanent extra lane, which will promote growth – including new housing - along the vital economic ‘corridor’ from London to the south coast.

“Poor connectivity and transport links are a barrier to sustainable growth across the region, including new housing and the creation of 13,000 new jobs. The £6 billion Thameslink improvements go live next year and will dramatically improve the vital rail corridor connecting Croydon, Gatwick and the south coast, but the full benefits of this scheme will not be realised until the bottlenecks at Croydon are removed.

“This work supports the Government’s new Industrial Strategy but it must start now to secure these improvements otherwise the land will be lost and it will be too late.”

“Growth across the region cannot be taken for granted and plans must be put in place now to ensure that road and rail links across the south east are fit for future generations. Improving capacity on the Brighton Mainline would also improve its reliability and the resilience of connections to Gatwick and the wider region, which would underpin growth beyond 2025 in whatever form it takes.

“Today’s report looks at how support can be coalesced across the region to get the ball rolling so that important schemes, such as Croydon rail improvements and the M23 Smart Motorways, are brought online as quickly as possible. Crucially, we have also identified possible funding streams for two exemplar schemes, including some non-traditional sources and possible private sector investment to support the early development of these projects.”

Peter Kyle, Hove MP and co- chair of the All Party Parliamentary group on Southern Rail, said: “Southern passengers have experienced awful service for a number of years, but when the existing dispute is resolved, we cannot escape the need to fundamentally upgrade the rail infrastructure for the whole region. Unblocking the bottlenecks in and around East Croydon station will future-proof capacity and improve performances for anyone travelling to or from the South Coast.”

Jonathan Sharrock, Chief Executive, Coast to Capital Local Enterprise Partnership, said: "Our area's growth depends on businesses and workers being able to get around easily, so the Brighton mainline upgrade is fundamental to the future prosperity of the whole region."

The remainder of new jobs created by growth of single runway Gatwick will be in London, neighbouring regions and the wider UK.