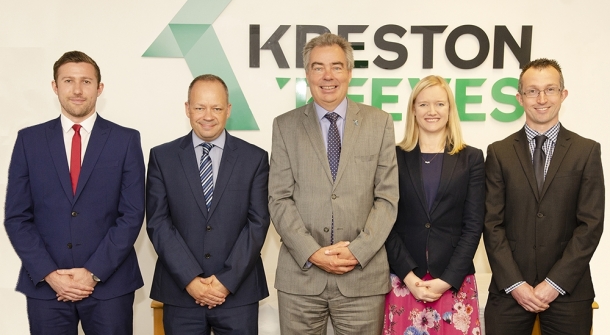 The three new partners are:

The promotions take effect from 1 June 2018 and brings the total number of partners to over 50.

A further 21 promotions were also made across the firm’s nine offices at all levels.

Nigel Fright, Managing Partner at Kreston Reeves, said: “Each of these promotions is very well deserved, recognising the contributions and commitment they bring on a day-to-day basis across the firm and to their own teams.  The entire firm passes on their warmest congratulations to Anne, Jake, and Mark and look forward to their continued contributions to the firm as it continues to grow and expand.”

Anne Dwyer, Partner, Audit and assurance and Head of Property and construction, based in London

Anne qualified as a chartered accountant in 2003, joining Kreston Reeves in 2009.  She works across a wide portfolio of businesses with a particular focus on medium and large owner-managed and AIM listed businesses.  Anne has a strong track record in the property and construction sector and heads up the firm’s specialist team as part of her new role.

Jake joined Kreston Reeves in 2007 and qualified as a chartered accountant in 2012.  He re-joined the firm in 2016 following a period working in industry.  He is a keen advocate of identifying and improving financial processes in order to aid visibility of client performance, enabling better management decisions to be made.  He works extensively in the manufacturing, healthcare and distribution sectors.

Mark joined Kreston Reeves in 1999 and was promoted to senior manager in 2015.  He has a strong track record in the life sciences and biotechnology sectors advising businesses across the globe on tax and raising finance.