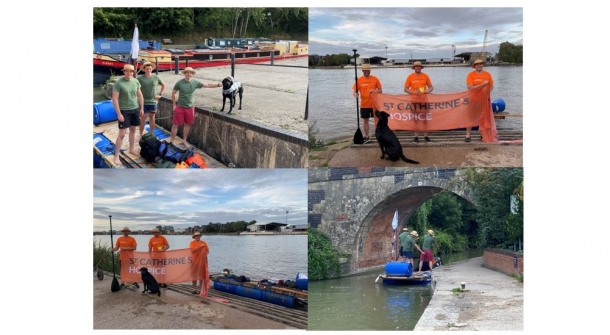 A triumphant trio have returned from an incredible trip paddling from Devizes to Chelsea to raise money for St Catherine’s Hospice.

In tribute to his dad, Rob, who was cared for by the local hospice, Charles Reynolds, along with his friends Kit Burgess, and Bob Blackstock, (to Windsor before being replaced by Ben Perkins on the final stretch) set out last Wednesday on a home-made raft.

Armed with only three paddles and their optimism, over the last week, they’ve tackled a journey of more than 120 miles and 77 locks. All on a raft made of floorboards and six old agricultural barrels!

Their adventurous spirit paid off and the self-proclaimed 3 ‘muppets’ have raised more than £11,000 in memory of Charles’ dad.

Charles said, “What an adventure it’s been! The journey took us longer than we thought, a week instead of four days, the weather was against us, and it was tougher than we imagined but remembering why we were taking on the challenge kept us going. We even became the most patriotic/optimistic “sailors” on the Thames for a short time during a brief gust of wind going in the right direction. When the wind wasn’t on our side, one of us had to wade alongside our raft, but we’re so thrilled that we completed our journey.

When my dad Rob was diagnosed with a glioblastoma multiforme brain tumour in February this year, it was completely out of the blue, but St Catherine’s were brilliant in caring for him and our entire family. They were incredible during the coronavirus lockdown too. They allowed us to continue to safely visit Dad at the hospice until he lost his fight in May.

For me, my mum and my three sisters, Dad was an irreplaceable father, husband and role model. He was a vet who spent his life helping people, and he was dearly loved by many. We sorely miss him, and if Dad was here, he’d have been the first to both condemn this raft trip as crazy, as well as grab a paddle and join in. I know he’d be incredibly proud of our efforts though.

The trio had wonderful support during their challenge, including many donations from people who met them during their journey. Charles said, “We told people why we were doing this and the love and support we got was amazing. I’d like to thank everyone who showed an interest in our fundraising, supported us, and donated. We’ve been blown away with how generous people have been. It means so much. Initially we had a target of £1,000, but in a time where St Catherine’s needs as much fundraising support as possible, we’re ecstatic that we managed to raise so much more.”

The ‘muppets’ also attracted the attention of local and national media with appearances on BBC Wiltshire, BBC Sussex, BBC Surrey and Chris Evan’s Breakfast Show on Virgin Radio after they were spotted by a presenter paddling down the Thames! Many listeners generously donated after hearing about the ‘muppets’ incredible feat. And Virgin Radio even challenged Charles, Kit and Bob to their next paddling adventure across to the Isle of Wight!

To make a donation to support the 3 ‘muppets’ please visit: https://www.justgiving.com/fundraising/3muppetsandaraft