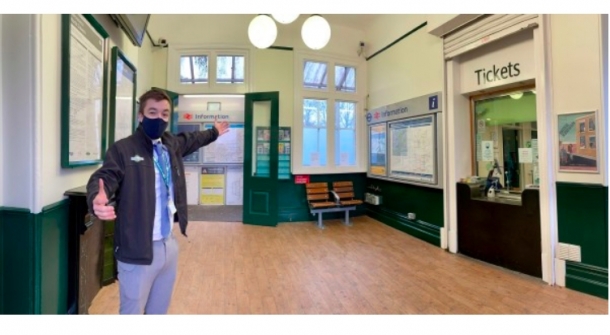 ·         Southern Railway to enhance every one of its stations

Proud Southern Railway station managers Nathaniel Owen and Steve Fleming are welcoming passengers to their newly spruced-up south London stations. Improvements at North Dulwich and Streatham are among the first to be completed in the train company’s network-wide, multimillion-pound programme that's making every station a better place for passengers.

At North Dulwich, Nathaniel is showing off the freshly refurbished ticket hall, restored with “heritage” colours and period features that befit its protected Grade II listed status as a building of special historic interest. The ‘Moss Green’ woodwork and contrasting cream walls match the original paintwork applied to all Southern Railway station interiors in the 1920s, and the “period” feel continues with dado rails, wood-effect flooring and repainting of the Victorian fire surround.

Nathaniel said: “I’m delighted that so much care has been taken to look after this popular historic building for the local community, while making it look and work better for our passengers. People travelling towards central London will also benefit from a new platform shelter being installed very soon.”

North Dulwich, opened in 1868 by the London, Brighton and South Coast Railway company, was designed by Charles Barry Jr, the architect of the Great Eastern Hotel at Liverpool Street station as well as several notable Dulwich landmarks including Dulwich Park, New College and St Steven’s Church. He was the son of Sir Charles Barry, who designed the Palace of Westminster.

The three stations serving Streatham - Streatham Common, Streatham Hill and Streatham itself - are enjoying a host of enhancements, many suggested by local people including the Streatham Transport Action Transport Group (SATG).

Steve said: “We’ve brightened up the station by painting the dark platform walls along the tunnelled area, refurbishing the waiting room and WC, and the ramp up to the waiting room entrance. We’re also improving the platform lighting, and letting more light onto the footbridge by replacing the boarding on the windows with frosted laminate.”

Southern are installing new benches and refurbishing toilets at all three stations.

Neil said: “It is great to see this investment in improvements that will be to the benefit of all regular users of the stations, and that they are immediately apparent. In particular, the brightening-up from the repaint, alongside the LED lighting soon to be installed under the bridge at Streatham station, will no doubt help to raise morale amongst all passengers as life gradually returns to something like normality over the months ahead. On behalf of Streatham’s rail passengers, thank you Southern Railway.”

Angie Doll, Managing Director for Southern and Gatwick Express, said; “While we’re keeping trains and stations clean and safe for travel, we’re also making every Southern station look and work better for our passengers and their local communities. Hundreds of improvements now under way are the results of local people telling us their priorities and getting actively involved, and I thank everyone for helping us to be a good neighbour.”