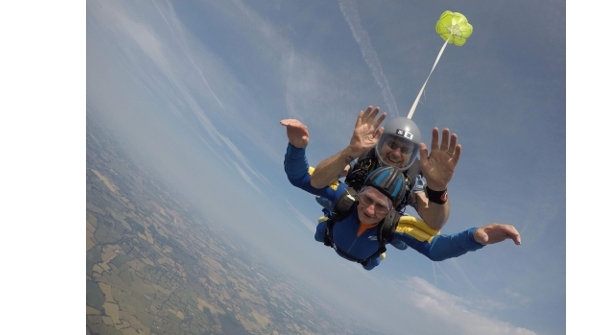 Dave’s wife Sheila died at our hospice six years ago after being diagnosed with pancreatic and lung cancer. After receiving bereavement support from the hospice team, Dave began fundraising for St Catherine’s as a way to give back for the support he and Sheila received, and to make sure they can continue to provide care for others who need them.

In 2018, at 81 years old, Dave completed his first skydive in aid of the hospice. Next week, at 84 years old, he’s undertaking his second! Here, he shares why.

“Initially Sheila was sent to Guildford Hospital. Medically they were great, but it felt a little bit like Waterloo Station as it was very busy there. Getting Sheila into the hospice was such a positive experience – the team were so kind and caring and it was very tranquil.

After Sheila died, I also had counselling, I’ve kept in touch with your hospice ever since”.

Fundraising gave Dave a sense of purpose after Sheila died.

Dave says, “I started fundraising with a jazz band event which raised about £1,000 and I then arranged another event myself which raised a further £800. I’ve also volunteered at different runs to cheer on other hospice supporters.

St Catherine’s does so much for so many people and I really like to show my appreciation for that.”

“It was wonderful! The freefall is pretty scary as you’ve got no sense of orientation but once the canopy opens up it’s the most tranquil thing. The instructor offered for me to take the controls but I declined and just asked that he make the experience last as long as possible.

In the end, we were the first jumpers out of the plane but the second to last getting to the ground. The instructor said that he’s done over 1,600 jumps, but that mine was in the top 100 for him - I think he knew how much I enjoyed it.”

A skydive is definitely not for everyone; once you’ve done it your adrenaline is running

Dave recalls, “I remember that one of my sons who came up to watch me had to take me for a cup of tea before I drove home last time to calm me down! A friend is taking me this time.

If Sheila were here now, she’d tell me I’m ‘a daft old bugger’, but I know she’d be so supportive. It’s definitely been hard raising money this year with the lack of contact thanks to the pandemic, but I get so much support from one of my sons and his family. I know that my friends from my clubs will support me too.”

After his second skydive, Dave is going to stay with a friend in Dorset for a week.

“It’ll be really nice to relax and recover. I also enjoy watercolour painting – anything from landscapes  to more technical pieces like aircrafts and boats. I was a draftsman, so I’ve always had an eye for drawing and as I got near to retirement my wife said that I should take up painting… so I did. It’s certainly kept me interested throughout lockdown!”