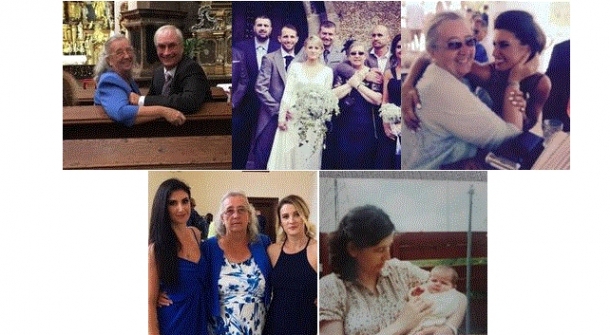 Next month Gemma Francis and her brother-in-law Dean Carden are running their first London Marathon for St Catherine’s Hospice in Crawley. Here Gemma shares why they’re taking on this challenge.

“My Mam Marilyn was amazing. I know everyone thinks their Mam is, but she really was. Mam met Richard at her church, and they fell madly in love. We always used to take the mickey out of them as they were like teenagers, always holding hands on the sofa, but Richard showed Mam what true love was.

When he was diagnosed with cancer of the gullet Mam put her life on hold to care for him. Unfortunately, his cancer spread and in March 2019 he was taken to the hospice.

At the same time Mam suddenly got very unwell and was taken to East Surrey Hospital. There  doctors found a tumour and told me and my sister that there was nothing they could do. We were told Richard had a couple of days left to live that same day.

Despite how unwell she was herself Mam was desperate to see Richard. Between the hospital and St Catherine’s they arranged for Mam to go to the hospice in her hospital bed to say goodbye. Richard passed away later that evening. Just 24 hours after losing the love of her life Mam was told she had terminal cancer.

When Mam started to become really unwell at home my sister, who was caring for her, knew that she needed more support. Mam had always been clear that she didn’t want us caring for her at home as she became less well and that she wanted to be at St Catherine’s.

In April 2020 Mam was admitted to the hospice

It was the middle of the coronavirus pandemic, so the hospice was adhering to strict guidelines, but they were incredible. Even though the nurses and doctors were all risking their own lives, they gave Mam beautiful care and gave us the chance to be by her side. The nurses even helped Mam do video calls so she could talk to my brothers who live up North.

Mam was in the hospice for two weeks

There were a lot of us who needed to say our goodbyes to Mam but despite the pandemic we were all able to say goodbye one by one.

When Mam died my brothers were waiting outside in the car park and a nurse went to speak to them out there. These sound like little things but they mattered so much. Even with everything that was happening in the world, there was the right level of support, communication and understanding.

It’s our way of contributing to the hospice and saying thank you for the care they gave. When me and Dean found out we’d got a marathon place we screamed with delight.

We’re hoping to raise at least £10,000 for the hospice and have already raised £6,000. Fundraising has given us and our family something positive to focus on. We’re still busy fundraising now. Dean’s holding a charity golf day at Sweetwoods Park Golf Club on Wednesday 29 September and our children have been selling their toys online to help raise money.

To support Gemma and Dean with their fundraising please visit: https://www.justgiving.com/fundraising/gemma-dean-marathon21 or to book a team for Dean’s charity golf day on Wednesday 29 September email  dean@intersign.co.uk