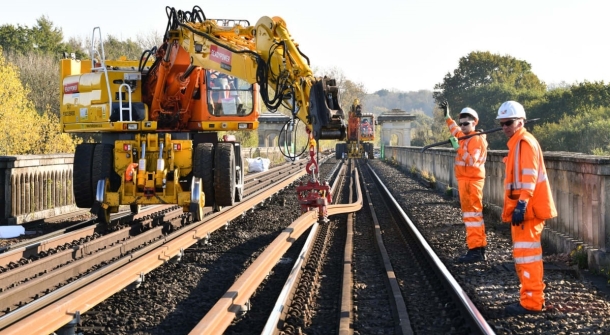 Network Rail have issued the following press release about major projects on the Brighton Main Line in the first quarter of 2022:

Network Rail engineers will use a nine-day closure of the Brighton Main Line in February next year, to deliver an £11m junction renewal near Haywards Heath and build a new underpass at Hassocks.

As a result of the work, the railway between Three Bridges, Brighton and Lewes will close for 9 days from Saturday 19 to Sunday 27 February 2022, with supporting weekend work taking place before and after the main closure. The announcement follows a fortnight’s closure of the line between Hove and Brighton, which was completed on time on Friday last week.

Katie Frost, Sussex route director for Network Rail, said: “I really appreciate the patience of our passengers as I know it feels like we’re constantly working on the railway, but by concentrating work into week or two-week blocks like this, we’re able to get more work done and reduce the number of weekends we’d have to close the railway.

“The Brighton Main Line is Sussex’s major railway artery and is used by hundreds of trains a day travelling to destinations across the South of England. By completing the critical work at Hove and planning this next major project, we are protecting the railway for the future and helping the country and the railway build back better from the pandemic. The alternative would have been up to 20 weekend closures or multiple bank holiday closures over two years, which would be unacceptable to our neighbours, passengers and stakeholders.

“We are working hard alongside our train operators to plan alternatives for passengers and keep them informed of the changes to services when work is taking place.”

Chris Fowler, Customer Services Director for Southern, said: “This route is one of the country’s busiest, and Network Rail’s major investment is essential to give our customers the reliable, on-time services they rightly expect. We’ll ensure that alternative transport is in place when lines are closed, and we’ll issue detailed travel advice over the coming months. Journeys will take considerably longer during the nine-day and weekend closures, and we thank customers in advance for their patience.”

Network Rail will use the time when lines are closed next February to rebuild Copyhold Junction with new track and points (near Haywards Heath), and replace track at Burgess Hill. In addition, Woodside level crossing near Hassocks will be replaced with an underpass.

Woodside crossing recently closed after a number of near-misses and evidence of people running unacceptable risks. The new underpass will provide a safe route under the tracks for people, without the risk of crossing the operational railway.

The work being delivered at Copyhold Junction and Burgess Hill includes: