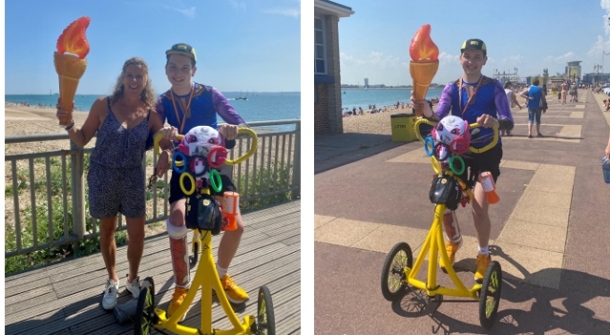 On Tuesday 20 July, 26-year-old Harley Salter from Portsmouth was joined by Olympic Gold Medallist, Sally Gunnell OBE for the opening ceremony of the ‘Alinkerlympics’ in Southsea. The 17-day ‘Alinkerlympics’ – designed by Harley’s mum Vanessa – kicks off on Friday 23 July and will see Harley take on 21 Olympic sport-inspired challenges using an Alinker walking bike to raise money for Chestnut Tree House children’s hospice.

Harley, who has a range of moderate to severe cognitive and physical disabilities, including Autism, Tourette’s, Anxiety, OCD, XYY Syndrome, and Hypermobility, was delighted to be joined by Sally Gunnell at the opening ceremony, where the Alinkerlympics torch was lit and Harley embarked on a one-mile pier-to-pier walk from Clarence Pier to South Parade Pier in Southsea.

“It was an absolute honour and privilege to be joined by a real-life Olympic Athlete, Sally Gunnell, to light the torch and set me on my way to the Alinkerlympics,” says Harley. Supported by his Mum, Harley will be taking on a different set of Olympic-themed challenges each day, from a 23.4k Alinker road cycling challenge to athletics, archery, karate, football and much more.

Harley is a Symes amputee, and the Alinkerlympics Opening Ceremony also marked the third anniversary of having his foot amputated due to a congenital birth defect that severely impacted his mobility. As well as a fundraising challenge, the Alinkerlympics is a celebration of how far he has come.

Sally Gunnell, who is a Vice President of Chestnut Tree House, said: “What an inspirational young man Harley is. It was so lovely to meet him and his mum Vanessa, and I wish them all the luck in the world with this incredible challenge.

“It was clear on meeting Harley, how excited he is about the Alinkerlympics, and he has come so far since having his foot amputated three years ago. I have been a huge supporter of Chestnut Tree House for many years now and I hope people get behind Harley and show their support.”

In addition to the 21 Olympic sport-inspired challenges, Harley is also taking on a daily 5k as part of Virtual Runners Tokyo Athlete’s Challenge. The 26-year-old is no stranger to taking on challenges – from abseiling the Spinnaker Tower and taking on the world’s fastest zipline, to the Virtual London Marathon, he has raised over £15,000 for various local and national charities. He even holds a Guinness World Record title for the fastest 10km on a seated tri-wheeled walking bike.

Harley’s Alinkerlympics journey will be documented on Instagram (@harleysalter). To follow or support his fundraising, please visit www.justgiving.com/fundraising/harleysalter-chestnuttreehouse