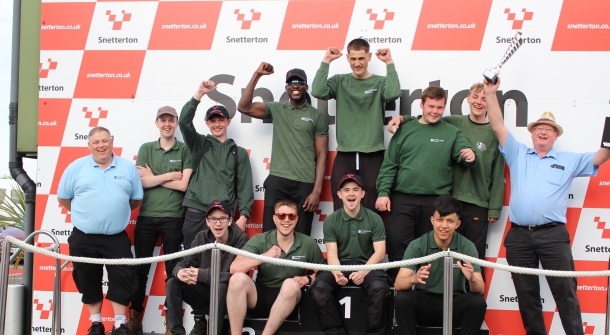 The Challenge, consisting of seven events, enables young people to get involved in the world of Motorsport, by converting a donor car into a fully functioning race car, fit for the track.

ESC students worked hard preparing their car in accordance with Challenge specifications, including installing and fitting a roll cage and modifying the suspension. In addition, the car was wrapped by the team’s sponsor, Boss Dog, organised by one of the Motorsport students.

Since the inaugural event at Oulton Park International on 9 April, the ESC team has competed against other colleges and universities, along with semi-professionals and professionals nationwide.

With professional driver Andy Burgess behind the wheel, the team have achieved some fantastic results, bringing back eight 1st place, one 2nd place and five 3rd place trophies.After a thrilling league of racing over the past few months, the ESC team headed into the Final at Silverstone with 162 points, 15 points ahead of other colleges and universities.
It was a fantastic event, which produced the highs and lows expected from a motorsport event. After some battling with other teams and sustaining some body damage to the car, the team managed to achieve the necessary 3rd place victories, meaning they only needed one more 3rd or better to win the Championship.

However, during the final race, with just six minutes remaining, the team’s car received a blow to the rear which resulted in it spinning off the track and into the barriers. Unfortunately, due to the car being severely damaged the driver was unable to continue, resulting in the team just missing out on the Championship and finishing in 2nd place.
Despite this, ESC students and staff were thrilled with the outcome, especially it being the College’s first year of being involved in a motorsport championship.
Jayne Dickinson, Chief Executive of Orbital South Colleges commented, “The work completed by staff and students within the Motorsports and Motor Vehicle department has been fantastic, motivating us all. The efforts towards the Student Motorsport Challenge have been tremendous. Our students have developed new skills at industry standard. Their very many successes are testament to the excellent teaching, support, and encouragement they receive from dedicated staff.”
George Keith, Motor Vehicle Co-ordinator and Motorsports Lead added: “It’s been an incredible racing season, and something our staff and students have been eagerly looking forward to month on month. Although we didn’t take home the title of the Student Motorsport Champions, our team has worked immensely hard throughout the Challenge, and we are all proud of the achievement. It has also provided excellent work experience for the students by developing real-life hands-on skills that they can take forward into industry.”
Full details on the Motorsports and Motor Vehicle courses offered at East Surrey College, can be viewed at www.esc.ac.uk.