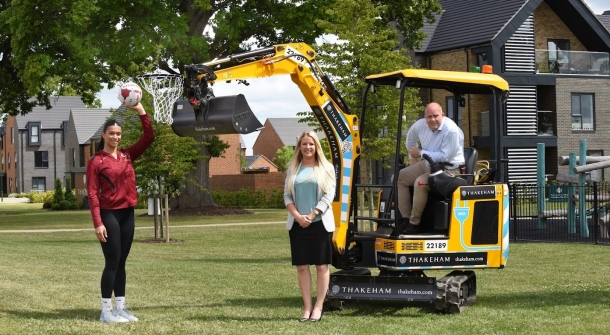 The link up between Thakeham and England Netball will see them partner on a series of new campaigns and initiatives to inspire the organisation, players and all involved in the sport to become more environmentally aware.

Both organisations already share the same environmental aspiration and a mutual commitment to playing their part in creating healthy sustainable communities.

Thakeham experts will work alongside England Netball to help shape the next phase in the organisation's push to create a sustainable sport in the future using Thakeham’s own sustainability journey for inspiration.

In 2020 Thakeham pledged that every home they build will be zero carbon in lifetime operation; that each home built will be carbon neutral in production; and Thakeham Group as a whole will also be zero carbon.


More than 3 million children and adults play netball annually in England, with more than 880,000 playing every week (pre-Covid), making it the second most popular female team sport.

Thakeham CEO Rob Boughton said: “Thakeham already supports several sporting clubs and organisations locally and regionally, but the new partnership with England Netball represents our first with a national sporting body. We are excited to be working alongside one of the country’s fastest growing sports, sharing our passion for creating sustainable communities.

“It was important for us to create a partnership with a sporting organisation that shared our environmental values. We have so much to share and learn from each other. We look forward to seeing what the future will hold for us both.”

Fran Connolly, CEO of England Netball, said: “We are delighted to announce this pioneering new partnership with Thakeham Group.  Creating a sustainable sport in the future is a strategic priority for us as, as part of our new 10-year Adventure Strategy for netball, and to partner with an award-winning community creator like Thakeham reflects our commitment to raising environmental awareness across our Netball Family.

“We look forward to working closely with Thakeham to inform and inspire positive sustainable change across netball at every level of the game.”