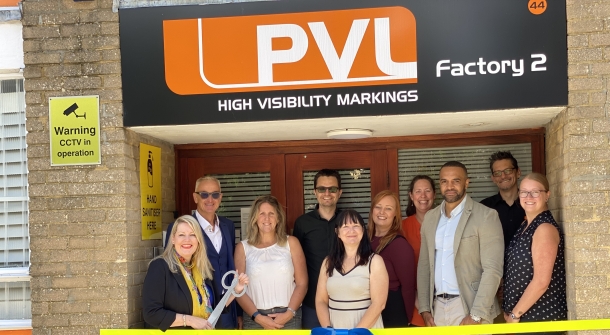 PVL, who manufacture the specialist reflective markings for emergency service vehicles across the UK and beyond, has celebrated the opening of its second factory in Burgess Hill with a special event attended by Mims Davies, Member of Parliament for Mid-Sussex and Parliamentary Under-Secretary of State for Employment.

Their second factory opened its doors on the Victoria Road Industrial Estate in 2020, but the official opening was rescheduled to this month due to the COVID-19 pandemic.

Since launching, it has helped continue the company’s impressive growth since it was founded by Nick Broom. PVL manufactures vehicle branding kits in reflective and printed materials, and, through successive contract wins now serves around 75% of the UK Police fleet market.

Mims Davies was met by Nick Broom, managing director and his PA, Emily Darnell, who introduced her to the team and toured the factory. Mims was shown vehicle wrapping in action, and pitched in with some collating and packing of reflective vehicle kits with the team during her visit.

She was particularly interested in the company’s forward-thinking and inclusive employment schemes, including their part-time and flexible working options. PVL employs several people with additional needs.

Mims Davies MP said: “It’s been a pleasure to officially open your second factory, especially since we met and worked together on a local initiative a few years ago. My tour of the factory was most enjoyable, and I wish you every success for the future.”

Managing Director, Nick Broom said: “It was an honour to welcome our local MP and celebrate our second factory. We’re rapidly approaching our 25th anniversary, and we’re proud to be market leaders with multiple awards under our belt and a proven track record.

“We even just enjoyed the best month in our history, and this visit is the icing on the cake just ahead of National Manufacturing Day on 7 July.”