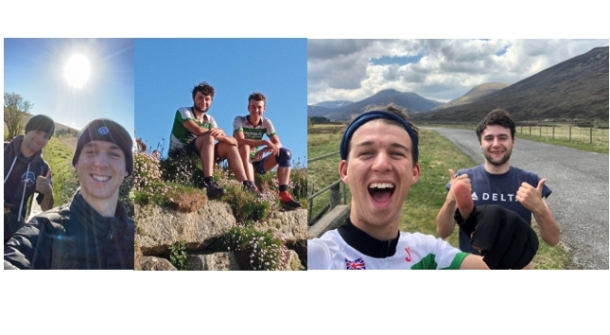 Giving themselves just 24 hours, 18-year-olds, Jack Evans, and Sam Alford – school friends from Storrington – will be trekking some of the largest mountains in Britain to raise funds for their local children’s hospice, Chestnut Tree House.

Setting off at sunrise on Wednesday 20 October, the pair will begin their ascent of Ben Nevis in Scotland, before heading south to Scafell Pike and then finishing in Wales to arrive at the summit of Snowdon before the sun rises the next day.

Covering 23 miles with a total ascent of 3,064 metres, the Three Peaks challenge is not for the faint-hearted. “The challenge will be tough, but we’re super excited and looking forward to it. We’ve been doing training treks through the South Downs, but we know that’s nothing compared to the challenge ahead of us,” said Jack.

However, the school friends are no strangers to endurance challenges, having taken on a mammoth bike ride from John O’Groats to Land’s End after their A-Levels in June, raising over £6,000 for Macmillan Cancer Support.

Speaking about why they chose to fundraise for their local children’s hospice, Chestnut Tree House, Jack said: “Chestnut Tree House was a no brainer really. We wanted to fundraise for a local charity so we could really see the impact our support was making. The work that the hospice does is so important and the feedback we have had from everyone supporting us has been incredible.

Jack and Sam have set themselves a fundraising target of £1,000. To support the pair, please visit: https://www.justgiving.com/fundraising/jack-evans-and-sam-alford