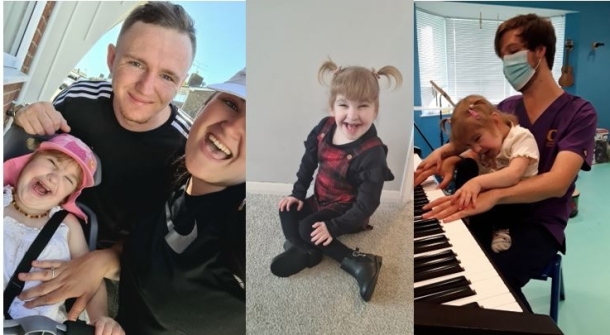 “Knowing that your child will pass away before you is every parent’s nightmare, but we’re so grateful that she is still here and still smiling. She’s our biggest inspiration.”

On Sunday 16 March, 27-year-old Luke Tate from Goring-By-Sea will be braving a 15,000ft skydive to raise funds for Chestnut Tree House, the children’s hospice which provides vital care for his daughter, Maisy-Leigh, who has an extremely rare genetic condition.

Speaking about why he has signed up to a skydive, Luke said: “I am an adrenaline seeker at heart so a skydive was an obvious choice for me! I want to raise money for Chestnut Tree House to thank them for all they do for Maisy-Leigh and our family. They give us the time and the strength we need to carry on and we’d be lost without them.”

In 2015, Luke’s wife, Hayleigh had an emergency C-section and just managed to catch a glimpse of Maisy-Leigh before she was taken to the high dependency unit. “By the time I got to see her five hours later, she was really poorly and needed support with her breathing,” said Hayleigh. “The doctors told Luke not to go home as I don’t think they expected her to last the weekend.

“It was total whirlwind from there. Maisy-Leigh was in critical care for almost four months, and we were told she had a number of complex conditions which would affect her brain, vision and coordination. Doctors also noticed her ears were set low on her face, she had a wide nose bridge, and quite a lot of hair on her face and back – all symptoms of something called Coffin-Siris syndrome. The condition is so rare that there’s only 200 known cases, so when she was diagnosed, we couldn’t believe what was happening.”

“I don’t think anyone’s able to prepare for what families like ours go through. Luke and I both had to give up work as the care Maisy-Leigh needed was 24-7 and we had to take it in turns to sleep.”

Things changed when Maisy-Leigh was one year old, and the family visited Chestnut Tree House for the first time. “We were a bit anxious about being referred to a children’s hospice, but as soon as we walked through the door it felt so homely. We were treated like family and given so much care and attention. As parents you can’t wish for anything more than your child to be loved and everyone there just adored her.”

Speaking about the importance of Chestnut Tree House, Hayleigh said: “For Maisy-Leigh, Chestnut Tree House is somewhere where she can have fun, laugh, and do things that any other child can do. But it’s also a place where, with a little bit of support, we can do normal things together as a family too. Like one weekend where we stayed over and all went swimming with the help of a nurse for the first time, and then that evening, Luke and I we were told we could go and chill out as a couple, have something to eat and watch tv whilst Maisy-Leigh was looked after.

“Often, it’s not until we see the stars hanging on the doors at Chestnut, which let people know that a child has died, that we remember why Maisy-Leigh has a place there. Knowing that your child will pass away before you is every parent’s nightmare, but we’re so grateful that she is still here and still smiling. She’s our biggest inspiration.”

Luke has set himself a fundraising target of £1,000 for his skydive. To sponsor Luke, please visit www.justgiving.com/fundraising/luke-x-hayleigh-tate